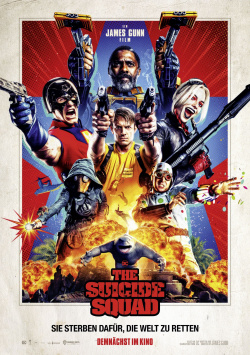 A dangerous experiment has fallen into the wrong hands, and with it the world is once again on the brink. To avert the danger, it will take the efforts of a very special suicide squad: The top-secret Task Force X, which includes some of the shadiest and most dangerous supervillains such as Bloodsport (Idris Elba), Peacemaker (John Cena), Harley Quinn (Margot Robbie) or King Shark. Led by Colonel Rick Flag (Joel Kinnaman), the squad is taken to the island of Corto Maltese - always overseen by the ruthless Amanda Wallers, who makes sure that each member of Task Force X carries out his mission. Any failure to do so means certain death - either at Waller's hands, or at the hands of one of the countless enemies waiting for the "Suicide Squad" on the island. But what they're really here to take out is something the supervillains never imagined in their wildest dreams....

After "Suicide Squad" by David Ayer was financially successful in 2016, but met with little approval from critics and fans, "Guardians of the Galaxy" director James Gunn now gets to try to help a bunch of anti-heroes achieve due screen honors with "The Suicide Squad". In doing so, the studio has clearly given Gunn free reign on the execution - and that's exactly why this mix of sequel and complete reboot works so much better than the first film. Gunn's production is quirky, brutal, original, and incredibly funny. True, there are some parallels to the "Guardians of the Galaxy" films, such as the perfectly chosen soundtrack and the idea of turning a ragtag team of misfits into heroes. But the bottom line is that "The Suicide Squad" is quite a standalone work that also breaks away from its only partially appreciated predecessor.

There are reunions with some characters from Part 1, such as Amanda Walker (wonderfully icy: Viola Davis), Captain Boomerang, Rick Flag or, of course, Harley Quinn. Still, you don't have to have seen that movie to have fun with the new suicide squad. What's fascinating about this sequel/reboot is that there are some characters that really shouldn't work because they already sound so absurd on paper that a cinematic realization would have inevitably become complete trash. But probably just because Gunn celebrates the trashy aspect of his film in a charming, respectful and at the same time very self-deprecating way, the whole thing works. Especially Polka Dot Man or the giant antagonist - a gigantic starfish - benefit from this. But also King Shark, in the original voiced by Sylvester Stallone, has become much more than a maritime knock-off of Groot due to Gunn's very special way of directing - which was to be feared after the first trailer. Idris Elba, as Bloodsport, is arguably the coolest character in the film, eclipsed only by a Margot Robbie as Harley Quinn, bubbling over with playfulness. She is so much better here than she was in her solo film. Just great!

Very little else should be revealed about "The Suicide Squad"at this point, because the film works best when it surprises you. And there are plenty of opportunities to do so over the course of just over two hours. The film is a smorgasbord of absurd ideas, witty dialogue and wonderfully over-the-top brutality. If there is one film that most closely resembles the comic book medium, it is undoubtedly this work. For me already one of the most entertaining blockbusters of the year and for all who like it colorful, weird and bloody therefore also: absolutely worth seeing!!

Cinema trailer for the movie "The Suicide Squad (USA 2021)"
Loading the player ...