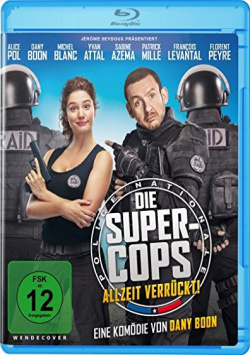 Movie: Young police officer Johanna (Alice Pol) has a dream: she desperately wants to join the special RAID unit. But getting in the way of her enthusiasm and passion is her very clumsy behavior, which sometimes leads to her helping robbers load the loot. But luckily her dad is a bigwig in politics and he can pull the necessary strings to make sure Johanna makes it to RAID after all. Here, Eug&egrave;ne Froissard (Dany Boon) is supposed to take care of her, which the tough professional is so not happy about. Not only because Johanna brings absolute chaos, but also because she is a woman. And he is not at all well on women since the separation from his great love. But although Eug&egrave;ne does everything to make Johanna throw in the towel, the policewoman is still good for some surprises!

With his latest directorial effort The Super Cops, Dany Boon (Welcome to the Sh`tis) has hit another bull's eye. The action comedy was able to attract over 5 million visitors to the French cinemas. Admittedly, this is only a fraction of what The Sh`tis managed almost ten years ago. But still, 5 million viewers is still a more than respectable success. The film is no masterpiece, but Boon has directed an entertaining and in places very funny comedy, which lives on the charm of the clumsy main character.

Alice Pol, who has already been seen in Boon's Super Hypochondriac, would have fit perfectly into the Police Academy films with her played naivety and talent for slapstick, of which The Super Cops is also strongly reminiscent in places. But it also brings back memories of another super-dork in the police force: in a scene where Johanna is supposed to take care of the protection of the French president, she could very well be the daughter of Frank Drebin from The Naked Gun. Boon himself remains a little pale next to Pol, although he also has a few laughs on his side as the frustrated macho-in-chief.

After a very fast-paced first third with a fairly high gag density, the whole thing loses a bit of steam. A few lengths slow down the story unnecessarily and towards the end the character of Johanna also loses a little of her charm. Nevertheless, The Super Cops offers entertaining entertainment for fans of Dany Boon and French comedies of the more turbulent kind. Nowhere near as good as The Sh`tis, but clearly better and funnier than The Super Hypochondriac and therefore quite clearly: worth seeing!

Picture + Sound: At picture and sound quality of the Blu-Ray, there is actually hardly anything to complain about. The image sharpness can largely convince, the colors are pleasantly powerful and the contrasts are very well matched. The sound is no revelation, but offers some really good surround effects in the action scenes! Good!

Extras: Bonus features on the Blu-ray include a couple of amusing bloopers (approx. 1:50 mins) and short interviews (approx. 3:09 mins), as well as some uncommented B-roll footage from the filming (approx. 16:18 mins), and various trailers.

Conclusion: With The Super Cops, Dany Boon has landed another big box office hit in his homeland. With plenty of slapstick and a bit of action, Boon has staged a fun comedy that can make up for some flat moments with its charming lead actress. The Blu-ray presents the film in good picture and sound quality. The bonus material, on the other hand, could have been a bit more extensive. Overall, there is just for fans of Dany Boon's humor a clear: Recommendable!