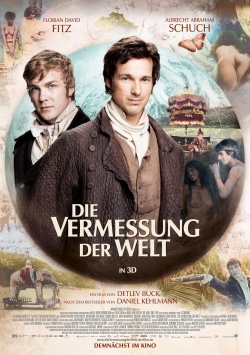 The Measurement of the World 3D

The success story that Daniel Kehlmann started with his bestseller The Measurement of the World in 2005, which sold over 2 million copies in Germany alone, is now being continued by Detlev Buck in the cinema. With images captured in state-of-the-art 3D technology, the fictional double biography about the naturalist and geographer Alexander von Humboldt and the mathematician and astronomer Carl Friedrich Gauss was transported to the screen in an entertaining as well as visually impressive way.

Carl Friedrich Gauss (Florian David Fitz), who grew up in poor circumstances, and Alexander von Humboldt (Albrecht Abraham Schuch), who came from a good family, could not be more different. Nevertheless, the two are united by one goal: they want to get to the bottom of the mysteries of the world. While Gauss, who was already a mathematical genius as a child, sets out to measure the world in his home country, von Humboldt is drawn to faraway places. Together with the French botanist Aim&eacute; Bonpland (J&eacute;r&eacute;my Kapone), he travels through South America and Central America to explore the animal and plant life, primitive peoples, and geography of these countries. What effects their research will have not only on their own lives, the two disparate scientists do not yet suspect.

To summarize the story of the film and its novel in a few sentences and do justice to the complexity of the story is almost impossible. Admittedly, the cinema adaptation is already slimmed down considerably in comparison to the novel. But even in this light version, the mixture of biography, adventure film, historical didactic play about the life of the bourgeoisie at the beginning of the 19th century, romance and comedy with all its philosophical approaches proves to be extremely extensive and multi-layered in terms of content.

Detlev Buck has nevertheless succeeded very well in creating a film from these numerous ingredients, which still seems surprisingly relaxed and little overloaded. Admittedly, some moments that are given a certain depth in the novel remain a little superficial in the film version. Moreover, the mix of humor and drama doesn't work in every scene, even if the actors are consistently convincing and the work of cinematographer Slawomir Idziak (Harry Potter and the Order of the Phoenix) has something worth seeing in almost every moment. But even if these weak points prevent the film from fully living up to the quality of the book, in the end they are not serious enough to weaken the high entertainment value.

For this, not only the script written by Daniel Kehlmann himself in collaboration with Detlev Buck is responsible. Also the very well selected cast contributes a considerable part to the success of this ambitious bestseller adaptation. It is not only the two main actors Florian David Fitz (Vincent will meer) and Albrecht Abraham Schuch (Der Turm) who seem to be perfectly made for their roles. Also supporting actors like a very charming Vicky Krieps, a once again extremely amusing Max Giermann (Rubbeldiekatz) or also J&eacute;r&eacute;my Kapone, whose French composure as Bonpland is the perfect counterpart to von Humboldt's Prussian stiffness, ensure that Kehlmann's dialogue is brought engagingly to life with their infectious enthusiasm for acting.

Even if the film didn't really need its 3D visuals, the use of three-dimensional technology really makes sense here, at least in places. After all, the depth achieved through it allows the viewer to delve even deeper into the fascinating worlds that von Humboldt and Bonpland explore. And although Gauss, on the other hand, rarely leaves his desk and never leaves his home at all, the film can score with some nice 3D effects. Qualitatively, the work can not really win. But at least one has here only very rarely the feeling that 3D is little more than a nice gimmick.

The measurement of the world is on balance despite some small weaknesses quite great entertainment cinema. Adventure, humor, drama, eroticism, philosophy, history - all of these are blended into an extremely entertaining whole that is compelling with great actors, an excellent set, and first-rate camerawork. In direct comparison to the novel, perhaps a little disappointing in some moments, but on its own a really good film that can be warmly recommended not only to connoisseurs of the book. Worth seeing!!!

Cinema trailer for the movie "The Measurement of the World 3D (Deutschland/Österreich 2012)"
Loading the player ...