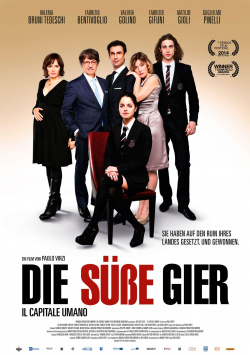 Appearances are perfect - but they are deceptive: when young Serena (Matilde Gioli) begins a liaison with Massimiliano, the son of the wealthy and influential Bernaschis, everyone involved is filled with happiness. Giovanni (Fabrizio Gifuni) and Carla Bernaschi (Valeria Bruni Tedeschi) are extremely taken with the confident young woman. And her father Dino (Fabrizio Bentivoglio), a small-time real estate agent, sees the relationship as an opportunity to make new, important contacts for his financial future. But behind the facade, things are very different. The relationship between Serena and Massimiliano is not what it seems. Carla is not the happy sunshine she outwardly gives, but a bored woman with a yearning for self-fulfillment. And the financial security Dino pretends to have in order to get in on a lucrative deal from Giovanni doesn't exist either. Slowly, the house of cards built of lies, deceit and greed begins to totter before a tragic accident threatens to bring it down completely.

From three different points of view, director Paolo Virzi traces the events leading up to the accident and its aftermath. But The Sweet Greed doesn't just switch the perspective from which the story is told several times. The tone also changes again and again. The result is a bitter, cynical social satire that is at times light-heartedly humorous and at other times darkly tragic. Virzi succeeds very well in counteracting the audience's expectations again and again, steering the story in a new direction and giving even seemingly unimportant details an important meaning in retrospect. In this way, a surprising, rousing and entertaining overall picture emerges, which hides its true character for a long time under the façade of a seemingly unexciting and restrained production.

How evil the story about wealth and power actually is, is only really revealed after the final scene and the following writing insertion, which also explains the original title (Il Capitale Umano, i.e. human capital) very well. Even though numerous moments before that were already strong, amusing or stirring in their own right, it's really only the overall picture that comes together at the end that really makes you think, which doesn't stop anytime soon even after the credits roll.

Borne by an absolutely convincing ensemble of actors, The Sweet Greed offers enigmatic entertainment for lovers of European arthouse cinema. In doing so, Paolo Virzi perfectly demonstrates that even sophisticated cinema can be presented in a light manner, and that intelligently constructed stories with depth and entertainment need not necessarily be mutually exclusive. A great pleasure, whose uncompromising ending is unfortunately a little too close to reality than one might like. Not necessarily material for the multiplexes, but first-class program cinema fare, for which there is a deserved absolutely worth seeing!

Cinema trailer for the movie "The Sweet Greed (Italien/Frankreich 2013)"
Loading the player ...