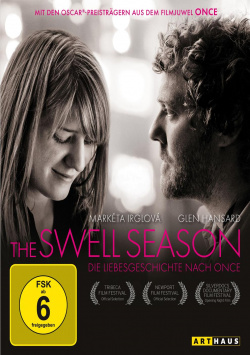 Film: It was an almost fairytale success story. Glen Hansard and Markéta Irglová, who had known each other since she was a young girl and played music together as The Swell Season, won the hearts of audiences with their film Once. The small independent production became a surprise international success and even earned the two likeable leads an Oscar, which Irglová accepted with probably the most charming acceptance speech in recent years. To make the fairy tale perfect, the friends also discovered their love for each other, which gave the true story an even more beautiful ending than the bittersweet finale of their film. Life can be so beautiful, can't it?

Filmmakers Carlo Mirabella-Davis, Nick August-Perna and Chris Dapkins followed Glen Hansard and Markéta Irglová for three years with their cameras on their extensive tours and visits home to Ireland and the Czech Republic following the huge success of their film. The result is a biography, concert documentary and tour diary in equal measure. The viewer learns, for example, that Glen left school early on the advice of his headmaster to try his hand as a musician, how he met Markéta and her family, and how their artistic collaboration developed. The fact that they are very reticent about talking about how their friendship turned into love comes across as very sympathetic and prevents the film from coming across as even remotely voyeuristic or calculating.

What begins as a fairy tale, however, is soon caught up with reality. Success changes the couple, both in very different ways. Tensions mount, passive-aggressive discussions backstage that eventually culminate in a conversation in a cafe that is very uncomfortable to watch. Markéat's on the one hand very affectionate treatment of the fans, which is contrasted by a great reluctance to be photographed, and Glen's openly expressed dissatisfactions, the touring life that is tugging at their strength, making almost no private life possible, are all factors that turn a beautiful fairy tale into bitter reality.

Always framed by the duo's wonderful music, their story is told in much the same way as Once was. Somehow, there is a certain sadness hovering over the whole thing, and yet the documentary leaves the viewer with a nice, positive feeling. If you like the music of Glen Hansard and his collaboration with Markéta Irglová, if you have succumbed to the charm of Once or if you are simply interested in good musician biographies and concert documentaries, The Swell Season can be warmly recommended to you.

Image + Sound: The documentary, shot in black and white, presents itself in good technical quality. The image is very clean and sharp in the bright moments and outdoor scenes, with only slight drizzle and minimal trailing effects in the darker scenes. The audio is rather subdued overall, with the interviews or conversations and quiet music being well intelligible and harmoniously mixed. The audio is only in the original English with German subtitles, but this is anything but distracting for a documentary primarily carried by music. Good!

Extras: As a bonus, the disc has just under 45 minutes of additional scenes and extended concert footage to offer. Not only are the concert excerpts, some of which are up to 8 minutes long, but also the additional scenes are purely musical in nature, but there are also a few nice little moments to see that make it even clearer how well Glen Hansard and Markéta Irglová harmonized not only professionally but also privately. Worth watching!

Conclusion: The Swell Season is a bittersweet music documentary that not only beautifully conveys the musical talent of its protagonists, but also illustrates the impact success can have on a relationship. A beautiful and moving film, which presents itself on the Blu-Ray in good technical realization and still has some worth seeing bonus scenes in the bag. If you liked Once or basically like good concert films and artist biographies, this film can be warmly recommended to you!