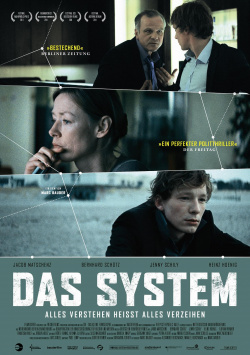 Mike (Jacob Matschenz) is twenty and without real perspective. Everyday life in a dreary prefabricated housing estate in Rostock is dominated by dubious shops, smaller raids or simply bored join smoking with his best buddy Dustin (Florian Renner). When Mike breaks into the house of Böhm (Bernhard Schütz), an old friend of his late father, one night, everything changes. Because instead of denouncing Mike, the lobbyist takes the young man under his wing and opens the door to a world Mike never even dreamed of. Instead of a hooded shirt and jeans he now wears a suit and tie, instead of illegal deals he now earns real good money with real work. Böhm becomes more and more a kind of substitute father, which Mike's mother Elke (Jenny Schily) doesn't like to see at all. She and Böhm are connected by a secret that Mike must never find out about. With the help of Dustin, Mike sets out to find answers on his own - and thus calls his father's old "friends" onto the scene, who don't like to see someone poking around in the past. But Mike knows that he first has to understand the system in order to really understand his place in life...

"The System - Understanding Everything Means Forgiving Everything" is an exciting political thriller, which despite a certain TV character (the film was produced in co-production with the "Kleines Fernsehspiel" of ZDF) and a staging that was very much carried in the first half of the film, can also create a certain tension in the cinema. This is particularly the case as the realisation of the story is positively influenced by the fact that director Marc Bauder has so far primarily made documentaries. He taught us to do the right and intensive research. Bauder has meticulously researched the economic and political backgrounds surrounding the construction of the Russian gas pipeline to Western Europe, the machinations of old Stasi roped parties in the period after the fall of the Berlin Wall and their interrelationships, all of which he skilfully incorporated into a dramatic feature film plot.

The viewer, like main character Mike, is still completely in the dark at the beginning. For initially the film seems to be only a social study of disillusioned young people who, as children of the so-called third generation, are dominated by a feeling of forlornness between a socially uncertain future and an often unknown, hushed up past. However, Böhm's true character gradually reveals the true background of the story. And that's extremely exciting, because it's based on reality.

The pictures, held in rather grey tones, exert a certain fascination, which greatly benefits the film's build-up of tension. Also the convincing play of the actors, especially Jacob Matschenz ("Renn, wenn Du kannst") contribute to the fact that "Das System - Alles verstehen heißt Alles forgiehen" has become a rather unusual, multi-faceted thriller. Although the bottom line is that the whole thing is more TV production (which is not meant negatively) than big cinema films are, lovers of sophisticated entertainment from Germany can certainly be recommended.

Cinema trailer for the movie "The System - Understanding Everything Means Forgiving Everything (Deutschland 2010)"
Loading the player ...