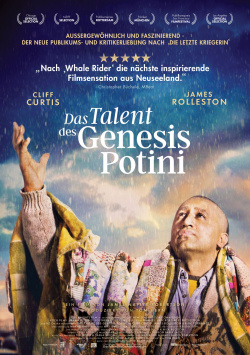 The Talent of Genesis Potini

Manic-depressive and unable to live an independent life - that's the diagnosis that makes Genesis Potini (Cliff Curtis) a permanent resident in a psychiatric ward. When he is released once again, his brother Ariki (Wayne Kapi) takes him in. Not really a good idea, as Ariki belongs to a biker gang that doesn't make for very good company for the unstable Genesis. When his nephew Mana (James Rolleston) is asked to join the gang against his will, the brothers clash so badly that Genesis moves out. Now he is faced with nothing again. But something gives him new support: playing chess! He starts teaching the game of kings to underprivileged youths at a local chess club. His goal is to get the kids to the finals of the Junior Championships in Auckland. At last he seems to have found something to fill his life with purpose and joy. But when Mana suddenly appears before him, wanting to join the chess club, it presents Genesis with a new and difficult hurdle.

The Talent of Genesis Potini is based on the true story of a man who, himself an outcast from society, has made a significant contribution to the advancement of disadvantaged children. His love of chess and his positive influence on children have taken many a youngster off the streets and given them a perspective for the future. Initially, the project was only aimed at Maori children, but it was later extended to other children, such as those with ADHD or writing difficulties. Although Genesis Potini had to fight his own demons again and again, he helped many people in his very own way without making a fuss about it. First a documentary, released in 2003, and now this feature film put Potini, who died in 2011, in the spotlight this quiet hero deserved much earlier.

Director James Napier Robertson, however, allows himself some dramatic liberties in his second feature. Unlike the documentary Dark Horse, he only takes the true background as inspiration for a story of his own, but at its core it reflects very well what the real Genesis Potini accomplished. The film does have some rather bleak, dark moments, especially at the beginning. But in the end, what Robertson tells here is quite wonderful feel-good cinema. It works so well not only because the story has a true background, which gives you back your faith in the good in people. The strong acting of the cast also gives the film a high level of authenticity and power. Cliff Curtis in particular, who is currently starring in the series Fear the Walking Dead, completely disappears behind the character of Genesis. His performance is so engaging and mesmerizing that that would actually be reason enough not to miss this festival favorite.

Admittedly, at some moments the drama isn't exactly light entertainment fare, but comes across as a wee bit unwieldy. You have to be able to get involved with the story and the tone of the production, so that after a while you can be taken in by the warm, feel-good carpet that is spread over the audience here. But then The Talent of Genesis Potini offers truly wonderful and highly emotional cinema that lovers of real program cinema gems should not miss. Absolutely worth seeing!

Cinema trailer for the movie "The Talent of Genesis Potini (Neuseeland 2014)"
Loading the player ...