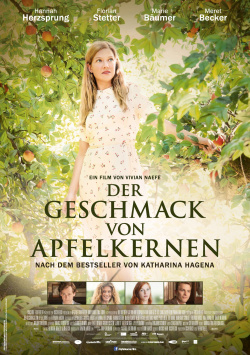 The Taste of Apple Seeds

Just when 28-year-old Iris (Hannah Herzsprung) has taken a job as a librarian in Marburg and has thus set her life on an even keel, the death of her grandmother Bertha throws this newfound order right back into disarray. Bertha has bequeathed the family home in the idyllic Bootshaven to the young woman. It is a house full of stories, full of beautiful but also painful memories. Bertha`s daughters, the photographer Inga (Marie Bäumer), Iris` mother Christa (Oda Thormeyer) and Harriet (Meret Becker), who is broken by the grief over the much too early death of her daughter Rosmarie, are not exactly sad about not having been burdened with the inheritance and the memories of the past that go with it. And for Iris, too, it is far from clear whether she actually wants to accept the inheritance. Max (Florian Setter), of all people, the brother of her childhood friend Mira, takes care of the estate. Whereas as a young girl she had teased Max wherever she could, Iris now feels quite attracted to the young man. But there seems to be no room for romantic feelings at first, as Iris must first come to terms with her own past and that of her mother and aunts.

An adaptation of Katharina Hagena's bestseller The Taste of Apple Seeds was a great challenge due to the different plot levels, which director Vivian Naefe and screenwriters Rochus Hahn and Uschi Reich mastered convincingly. Although the plot jumps back and forth between different time levels again and again and seems to be somewhat confused by the secrets the characters carry around with them, in the end a very coherent and really beautiful overall picture emerges. The visual realization stands out in a particularly positive way. While many German productions that make it into the cinema would actually be better off on TV visually, the images accompanied by Sebastian Pille's gentle music have absolute cinema level. In the particularly idyllic scenes, the novel adaptation almost seems like a German Nicholas Sparks counterpart - and that is absolutely to be understood as a compliment.

Of course, the whole thing is a bit cheesy at times and the emotions of the audience are manipulated by the images, the music and the facial expressions of the actors in a not exactly subtle way. But through the successful construction of the multi-layered plot and through the contrast between a sometimes quite dark dramaturgy and the great warmth radiating visual realization, the film gets an emotional depth, which saves it from degenerating into a superficial schmonzette even in moments that are too much covered in kitsch and clichés.

So the story between aunt Inga and the young gas station attendant Peter (Friedrich Mücke) really goes to the heart and also the relationship between Iris, her cousin Rosmarie and the common friend Mira provides some really quite strong moments. The acting of the young actresses is also responsible for this. Especially Paula Beer, who could already inspire in the historical drama Poll, delivers a great performance as a conniving, manipulative girl. Anyway, Vivian Naefe was able to get a really good ensemble of actors in front of the camera, where especially the very different female characters are excellently cast.

To really enjoy The Taste of Apple Seeds, you should already have a soft spot for great emotional cinema and also for pleasantly portioned kitsch. If you can then lose yourself emotionally in the various storylines and time levels, you will be offered two really nice hours of cinema that have a lot of romance, drama and wonderful images to offer. Absolutely worth seeing

Cinema trailer for the movie "The Taste of Apple Seeds (Deutschland 2013)"
Loading the player ...