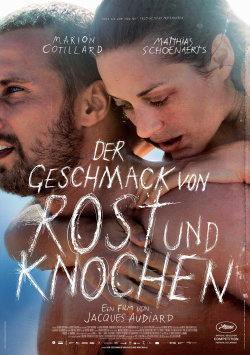 The Taste of Rust and Bone

The beefy, emotionally closed-off Ali (Matthias Schoenaerts) travels with his five-year-old son Sam (Armand Verdure) to visit his sister Anna (Corinne Masiero) on the C&ocirc;te d`Azur. There he hopes for a better life, because right now things are not looking good for him. He has no money, no job and is confronted from one day to the next with the role as a father, which is completely overwhelming him. Here he is now able to live in his sister's garage and also finds two jobs at once to which he can devote himself fully while Anna takes care of Sam. During a shift as a bouncer at a nightclub, Ali meets the attractive yet brittle St&eacute;phanie (Marion Cotillard). They get along right away, but both appreciate the non-committal. And so it seems to remain then also with the unique meeting. But after some time, Ali unexpectedly receives a call from St&eacute;phanie, who is confined to a wheelchair after a catastrophic accident at her job at Marineland and has lost all zest for life. She can't handle sympathy, feeling downright crushed by emotion. Ali's sober and matter-of-fact nature seems to be the only thing that helps her through this difficult time. And indeed, his way of helping her into the sea or giving her back the joy of sex helps St&eacute;phanie out of her slump. But the small signs of happiness don't seem to last.

With The Taste of Rust and Bone, Jacques Audiard, who could already inspire with A Prophet, has directed a moving and pleasingly unsentimental drama, which, despite a rather undercooled atmosphere, especially at the beginning, quickly grabs the emotions of the audience and stirs them up again and again. At the same time, Audiard knows very well not to let his audience be completely crushed by the sadness of his characters and their stories. Time and time again, he builds in moments that are either simply beautiful or restrainedly humorous in their own way. But such moments succeed in tying the audience to the characters, who would otherwise probably come across as less than sympathetic. With Ali in particular, this is of immense importance, as his seeming disinterest in those around him, whether it be his son, his sister or the women he dates, is not exactly an endearing quality. But through the subtle staging and convincing acting of Matthias Schoenaerts, it becomes clear that Ali is struggling with his inner demons and is nowhere near as jaded as he first appears.

The same goes for St&eacute;phanie, who not only finds her way back into life through Ali's pragmatic help from her self-imposed isolation, but also feels something like admiration and passion at the sight of the illegal fistfights he engages in to earn some extra money. Even if the film is a bit too heavy handed when it comes to the strokes of fate and the finale lacks the subtlety that otherwise distinguishes the film, this fascinating portrait of two existences that have been badly battered by life leaves an absolutely positive impression in the end. This is especially due to the perfect interplay between the strong performances of the actors and the captivating visual language, which clothes the events in a very special atmosphere that is hard to escape. The scene of St&eacute;phanie's accident is particularly impressively staged, one of the biggest goosebump moments of recent months.

The Taste of Rust and Bone is truly not an easy film. A certain bleakness dominates too much, intensified especially by the picturesque backdrop of the C&ocirc;te d`Azur. For it is precisely the contrast of an area with which one tends to associate a carefree, relaxed life or even luxury with the everyday life of the protagonists, dominated by dreariness and gray hopelessness, that makes the very special charm and impressive effect of the film. If you like great acting cinema from Europe and don't let yourself be put off by a heavy dramaturgy, you will realize in the end that Jacques Audiard has directed an extremely life-affirming and optimistic film that will linger with the viewer for a long time. And that's why, in spite of a few small lengths and an ending that's a bit too thick, the bottom line is that it's also worth seeing: Absolutely worth seeing!

Cinema trailer for the movie "The Taste of Rust and Bone (Frankreich 2012)"
Loading the player ...