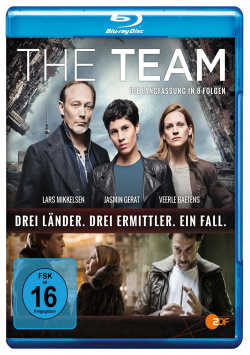 Film: When three prostitutes are murdered in Denmark, Belgium and Germany in quick succession in the same way, the Joint Investigation Team is commissioned to investigate the case. Harald Bjørn (Lars Mikkelsen) from Denmark, Jackie Mueller (Jasmin Gerat) from Germany and Alicia Verbeek (Veerle Baetens) from Belgium, together with their respective colleagues, have to track down a killer who apparently murdered six years ago. But it quickly becomes clear that things are far from as simple as they seem to be. And soon the investigators are stuck in an almost impenetrable network of corruption, human trafficking, murder and drug smuggling. And although their biggest opponent in the investigations is time, they are repeatedly slowed down by their complicated private lives. But against all odds and across all borders, they find a hot trail that brings them quite a bit closer to the shocking truth...but still not close enough to solve this case.

"The Team" is a dark crime series, which is dramaturgically quite conventionally structured. But the idea of having a case investigated by three investigative teams from different European countries gives the series a very special appeal. A total of eight countries were involved in the production, which cost 10 million euros. The different atmospheres of the many different locations, the mix of languages audible at least in the original version and the first-class direction by Kasper Gaardsøe and Kathrine Windfeld ("Kommissarin Lund", "Die Brücke"), who unfortunately died far too early in February, make this Eurocrime an extremely exciting and thrilling TV experience that can captivate from the first to the last minute.

The script always convinces with new twists, which always occur when the viewer has the feeling of having seen through the case. The investigations into the murder cases are further complicated by the not exactly simple private circumstances of the individual team members. While Alicia is struggling with her mother's alcoholism, for example, and is thus hampered in her work more than once, Jackie's already broken relationship threatens to fail because she has to work with Harald again, with whom she once had an affair years ago. For him the reunion doesn't come at the perfect time either, because his wife is expecting a baby that could be born at any time. Admittedly, some of these plot elements are a little clichéd and seem somewhat forced. But the implementation is so sovereign that it still works really well and the entertainment value is even increased by these personal aspects.

The actors are almost first-class through the bank away. Only the game by Sunnyi Melles seems too exaggeratedly theatrical. She is supposed to play a diva, but in direct comparison to Lars Mikkelsen's or Veerle Baetens' rather natural-looking playing, her artificial appearance repeatedly lays down like a small shadow over the performance of the otherwise so convincing ensemble. But despite this small flaw, the very positive overall impression that the series of eight episodes can leave behind is hardly clouded. The case with all its proliferations is extremely exciting, the staging of a depressing atmosphere and the European locations lend the whole an atmospheric flair. Those who like series like "Die Brücke" should not miss "The Team". Absolutely worth seeing!

Picture + sound: With its very restrained colouring, the picture well underlines the dark and dreary atmosphere of the series. All in all, the sharpness and the detailed depiction leave a good impression even in the darker scenes. The dialogue and the restrained soundtrack predominate in the sound, but every now and then also well used sound effects make sure that not only the tension increases, but also that a little dynamic comes into the surround range. Good!

Extras: In addition to an extensive booklet, the double disc set also has a short but very interesting Making of, as well as a featurette in which the main characters are introduced. Gut!

Fazit: "The Team" is a European co-production that follows the work of three investigative teams on a cross-border case. Exciting, clever and very atmospheric, the series captivates from the first to the last episode. The Blu-ray presents the entire season in a long version and also has an extensive booklet and a worth seeing making of on board. Those who like series like "Die Brücke" or "Kommissarin Lund" simply can't avoid this successful teamwork. absolutely recommended!