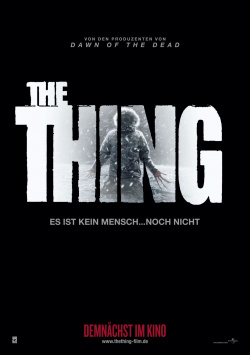 With his remake of the 1951 scince-fiction classic The Thing from Another World by Howard Hawks and Christian Nyby, John Carpenter created a horror classic in 1982 that, while not a financial success at the time, continues to win over a loyal fan base to this day due to its coherent atmosphere and great effects for the time. Now, director Matthijs van Heijningen, along with the production team behind the successful Dawn of the Dead remake, has once again set out to bring The Thing to life. But the whole thing was not meant to be a remake. Rather, the latest version tells the prequel to Carpenter's film, set in the very research station that Kurt Russel's character finds destroyed and abandoned at the beginning of the 1982 film. What happened to the Norwegian research team?

After they accidentally discover a spaceship hidden in the ice, that same research team calls in American paleontologist Dr. Kate Lloyd (Mary Elizabeth Winstead) to help. She is to help the team around research leader Edvard Wollner (Trond Espen Seim) with the investigation of the spaceship. In the process, Kate, Dr. Sander Halvorsen (Ulrich Thomsen) and Kate's colleague Adam (Eric Christian Olsen) come across a creature trapped in the ice that appears to have died in the crash. But obsessed with curiosity and a thirst for research, the researchers naturally don't leave the creature in its ice coffin, but bring it to the station to experiment on the supposed cadaver. But in doing so, they have awakened a particularly bloodthirsty creature that mercilessly reduces the crew of the secluded research station in a particularly perfidious manner.

Although The Thing sees itself as a prequel to The Thing From Another World and there are definitely some successful references to Carpenter's classic (especially during the credits, the bridge between the two films is built), it is difficult not to speak of a classic remake here. Because basically, the exact same story is told here only with different characters. There are even moments that seem to be taken over almost identically. But regardless of whether it's a remake or a prequel, there's really only one really important question: does the whole thing work as a proper horror movie?

The answer is - with minor reservations - yes! The claustrophobic atmosphere in the research station, which is isolated from the outside world, makes for some good goosebump moments and the attacks from the Thing are also staged very effectively at times. The only negative aspect is the excessive use of computer effects. Because even though the practical effects in Carpenter's film are clearly recognizable as such, they were and are extremely effective in their own special way. The computer effects here, on the other hand, seem a bit too sterile to truly terrify the inclined viewer. However, they are still fun.

The actors are fine, though Ulrich Thomsen seems a bit underwhelming and Mary Elizabeth Winstead a bit over the top. Winstead basically holds the role that Kurt Russel played in Carpenter's film. And Winstead just doesn't come close to the latter's coolness. That being said, the actors do a decent job, especially since most of them are just fodder for the walking monster anyway.

So, the bottom line is that The Thing doesn't fare quite as well in direct comparison with The Thing From Another World - at least for fans of Carpenter's film - but it's certainly enjoyable as an entertaining monster horror. Not a new cult film, but entertaining genre entertainment with some nice effects. Worth seeing!