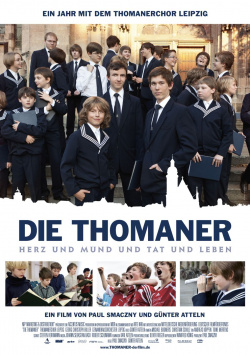 In 1212, on an initiative of Margrave Dietrich of Meissen, the Thomanerchor was founded together with the Thomaner School, also founded in that year, and the new collegiate church of the Thomanerkloster. In the centuries that followed, famous musicians and composers took over the direction of the boys' choir time and again, including Johann Sebastian Bach, who was cantor of the choir in 1723. Today, 800 years after its founding, the St. Thomas Boys Choir is one of the most respected choirs in the entire world. And even though the boys today no longer have to sing in return for schooling, food and shelter, as they once did in the Middle Ages, the basic principles and values of the choir remain the same.

The Thomaner follows some members of the choir over the course of a year. Not only is the work of the choir shown, but also life in the boarding school, illuminating what everyday life is like for the boys between the modern world and the community in a construct shaped by tradition. As a symbol of the connection between tradition and modernity, so to speak, is the move of the boys from the old alumnat, which previously served as a dormitory and now has to be completely renovated, modernized and enlarged, into a temporary container building. The background to the modernisation measure is the view of many parents that children today are used to more privacy and therefore rooms in which four or more boys live together are no longer in keeping with the times. The choir must therefore face up to these new demands if it is to continue to exist. For only then will enough children still join the choir, who in turn can then be taught the traditional values.

The makers were given complete access to the lives and work of the choir members, on the understanding that the boys' tight schedule would not be disrupted. This also avoided staging or repeating certain moments, which is also quite a common practice in documentaries. This actually inevitably resulted in a very authentic picture of the life of the St. Thomas Boys Choir, which perhaps treats some less pleasant aspects too superficially or even omits them, but is nevertheless very interesting and worth seeing.

However, the directors were not interested in showing a historical outline of the St. Thomas Boys Choir. Those hoping to learn more about the historical background will certainly be disappointed. It is true that some historical events are touched upon in various conversations, and there is also talk about the importance of Bach as cantor and about the significance that his music still has for the St. Thomas Boys Choir today. But first and foremost it is about the students, their wishes, their dreams, but also their fears and how they cope with the enormous pressure to perform. The fact that not everything is all sunshine at St. Thomas, that the boys don't always like each other and that the lack of closeness to the family is extremely difficult for many, especially on Christmas Eve, when the St. Thomas students traditionally parade through the streets and sing for the people before celebrating Christmas together, is definitely made clear in the documentary. Nevertheless, the rather positive overall picture prevails, which is conveyed with a lot of heart, some humor (the audition of the new students, for example, is a quite wonderful and also very funny scene) and, of course, with a lot of music.

Die Thomaner - Herz und Mund und Tat und Leben has become a very nice snapshot, which is certainly only conditionally suitable as a historical document for the 800th anniversary. As a tribute to a great choir and as a clear testimony to the importance of music in education for children, this entertaining insight into the everyday life of the Thomaner is definitely worth watching!

Cinema trailer for the movie "The Thomaner (Deutschland 2011)"
Loading the player ...