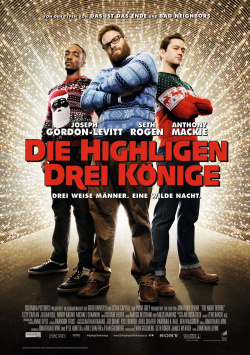 When his parents died just before Christmas fourteen years ago, Isaac (Seth Rogen) and Chris (Anthony Mackie) were there for Ethan (Joseph Gordon-Levitt). To distract him from his grief, they took him out on Christmas Eve to wander the New York nightlife. And thus was born a tradition that will be celebrated one last time this year. Because now that Isaac is about to become a father and Chris is a successful athlete, the time has come to finally grow up. But this last party night is to be something very special, unforgettable. Because Ethan has actually gotten his hands on tickets to the legendary Nutcracka Ball, the Holy Grail of all Christmas parties. Armed with a particularly intoxicating Christmas package from Isaac's wife Betsy (Jillian Bell), the three friends set off on one last wild trip through New York. But when they run into Ethan's ex Diana (Lizzy Kaplan) at the very first bar, it quickly becomes clear that not everything will go as planned that night.

The Highly Elderly Three Kings reunites the trio of Joseph Gordon-Levitt, Seth Rogen and Jonathan Levine in front of and behind the camera after 50/50 - Friends for (Over)Life. And again they try to deal with some serious topics in a humorous way. However, it doesn't succeed nearly as confidently here as it did in 50/50, where even the crudest gags still had some sensibility. That's almost completely absent from this wacky Christmas comedy, except for the first few minutes. Instead, stoner humor, penis jokes, and all manner of adolescent banter dominate the proceedings. Only now and then does a certain cleverness flash through in the gags, such as when Chris takes every opportunity to insert surreptitious advertising into his cell phone videos, or when it turns out that the all-knowing dealer (wonderful: Michael Shannon) isn't who he claims to be.

But overall, the film is exactly the kind of slightly infantile comedy you'd expect from Seth Rogen and company. It works really well whenever the gags are served up a wee bit more subtly. Then the film definitely reveals a certain cult potential, which unfortunately can't really unfold in the end. Because too often the humor just overshoots the mark, becomes too flat, the somewhat improvised dialogues too hysterical or the slapstick too clumsy. In the end, you're left with a somewhat unbalanced overall impression that makes one thing quite clear, though: The Magi could have been a great comedy with a slightly better script.

When the three friends arrive at the legendary Nutcracka Ball, where Miley Cyrus and one of Rogen's former co-stars make wonderfully self-deprecating guest appearances, it's just as clear as it is when the three friends visit a department store that you've seen before in the Tom Hanks comedy Big, or when they have a somewhat degenerate confrontation with one of Chris' teammates. It's moments like these, then, that make the film, despite its gratuitous zaniness and bland gags, not at all typical Christmas fun. It's a shame, to be sure, that the film, and by extension its extremely talented director, fall short of their potential here. But if you liked movies like This is the End or Pineapple Express, you'll definitely find this party night in New York to be quite a treat. Worth seeing