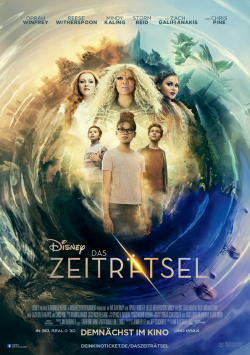 Since the disappearance of her father (Chris Pine), a famous physicist, there is a dark shadow over the life of Meg (Storm Reid). Not only her above-average intelligence, but also the truthful theses, which her father had presented to the public shortly before his mysterious disappearance, make the girl an outsider at her school. But then suddenly the supernatural beings Mrs. Soundso (Reese Witherspoon), Mrs. Welche (Oprah Winfrey) and Mrs. Wer (Mindy Kaling) appear with Meg and her family and claim to be able to help find Meg's father again. The girl, her little brother Charles Wallace (Deric McCabe) and Meg's classmate Calvin (Levi Miller) have to embark on an adventurous journey through time and space - into fantastic worlds that not only blow up any imagination, but also hold unexpected dangers in store…

The Disney brand actually stands for entertaining, often spectacular family entertainment. Here the film version of the bestseller "Die Zeitfalte" by Madeleine L`Engle seems to be in exactly the right hands. Especially since Jennifer Lee, who wrote one of the biggest hits ever for the studio with "The Ice Queen", could be won for the script. The director was Ava DuVernay, who convinced the audience and critics with her drama "Selma". The best conditions, then. It is all the more astonishing that "Das Zeiträtsel" has probably become the biggest piece of nonsense in years that has been brought to cinemas under the Disney brand.

You have to seriously ask yourself if anyone has read the script, looked at the production and costume designs or seen the wacky footage, because everything seems to have gone wrong here. The script is a total mess of ideas, which can't be put together to a coherent whole just because of the many logic holes and connection errors. DuVernays direction seems almost dilettantish in view of many unnecessary close-ups and editing errors and the costumes look as if Harald Glööckler himself had puked on the screen.

You have to ask yourself seriously for whom the film is made. For very small children it might be pretty pretty to look at times, but dramaturgically it's a bit too complex and in some scenes it's really scary. It's also nothing for older viewers, since they can't overlook the many weak points of the production as benevolently as children can. So there are still children between the ages of 8 and 15. Well, they might actually like this fantasy cucumber, but on the other hand the offer for this target group is big enough that something better is guaranteed to be found under it.

I am personally a big fantasy fan and I love many of the adventures Disney brings to the big screen. But "Das Zeiträtsel" has only a few short moments to offer, which I could say with a clear conscience that it even comes close to the quality one is accustomed to from this studio giant. And therefore there is only one: Very, very conditionally worth seeing!

Cinema trailer for the movie "The Time Puzzle (USA 2018)"
Loading the player ...