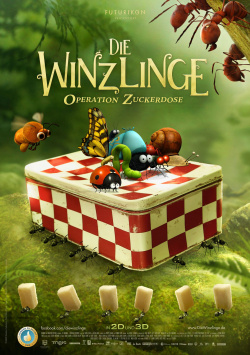 The Tiny Ones - Operation Sugar Bowl

In a picturesque valley, a little ladybug lives with his family. When he is to learn to fly, he is separated from his parents and siblings. Left all on his own, the little ladybug hides in a sugar bowl left behind by humans. Too bad other little animals discover this rare treasure and want to claim it for their own. A group of black ants want to take the can to their lair. But they are attacked by a troop of evil red ants who want the sweet gold for themselves. Now the little ladybird and the black ants join forces to bring the sugar bowl safely to the burrow. But getting there is more difficult and dangerous than they thought - and the red ants won't be lost that easily either.

Nearly ten years ago, H&eacute;l&egrave;ne Giraud and Thomas Szabo allowed viewers an original as well as endearing glimpse into the lives of insects with the animated series Minuscule. In 78 clips, each 4 to 6 minutes long, real landscape shots were mixed with animated insects. The series was a resounding success, and not only in France, which is why the two filmmakers felt confirmed in their plan to make a feature film about the world of the cute insects. While the style of the series was to be maintained, the narrative structure had to change completely. While the series consisted of a series of short, self-contained stories, the film was to tell a very big adventure.

The result is called The Tiny Ones - Operation Sugar Bowl and, after the great success in France with over 1.5 million viewers, is now finally coming to our cinemas. The impressive landscape shots were filmed in the French national parks of Mercantour and Ecrins. Truly breathtaking shots were taken there, into which the little heroes were then animated. This alone sets this film apart from other animated adventures. But what makes the film really special is that, as in the series, there is no language at all. It's fascinating how the creators managed to make you understand the actions and even the emotions of the little ladybug and his companions without so much as a spoken word.

H&eacute;l&egrave;ne Giraud and Thomas Szabo have created an incredibly enchanting film that is at times extremely funny, at times just beautiful, and at other times has become very exciting. Even though this is especially recommended for young children, adults will also have a lot of fun watching the capers of the little insects. Whether it's the chavvy gang of flies that makes life difficult for the ladybug, the lovable troop of ants that tries every trick in the book to get the sugar bowl to the burrow, or a small hairy spider in whose house the ladybug suddenly finds himself, all of this is so lovingly and humorously realized that the nearly 90 minutes of the film literally fly by. A great family film and therefore also: Absolutely worth seeing!

Cinema trailer for the movie "The Tiny Ones - Operation Sugar Bowl (Frankreich/Belgien 2013)"
Loading the player ...