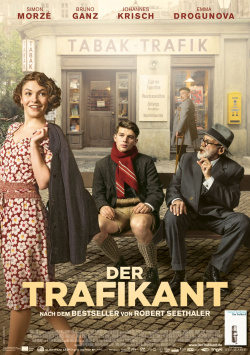 Vienna in 1937: 17-year-old Franz (Simon Morz&eacute;) is sent by his mother from the small village of Attersee to the big city to work for the tobacconist Otto Trsnjek (Johannes Krisch). In the small tobacconist's shop the boy is supposed to learn to respond to the wishes of the customers, so that especially the regular customers leave the shop satisfied. Among them is the world-famous psychoanalyst Sigmund Freud (Bruno Ganz), with whom Franz quickly becomes friends. Especially when the boy falls in love with the Variet&eacute;dancer Anezka (Emma Drogunova), he hopes for Freud's advice. But he can't really help him, so Franz must fight for his love on his own as the city is rocked by the invasion of Hitler's troops.

With the film adaptation of Robert Seethaler's novel Der Trafikant, director Nikolaus Leytner has staged a beautiful, albeit in places somewhat tough coming-of-age story. In addition to the actors, the set and the camera work have to be mentioned positively. Especially the imagery of the movie is always of special power, which is intensified whenever dream sequences are used. Visually, these are the film's strongest moments. The story itself is moving and is sometimes told in a very thoughtful way, then again with a cryptic humour. What Leytner skillfully avoids, however, is laying it on too thick and falling into patterns that viewers might well have expected with some aspects of this subject matter.

But the fact that the film doesn't get sentimental doesn't mean that it doesn't touch, sadden, and infuriate, and at the same time also counter these negative feelings with hope. Leytner manages this in a pleasantly unagitated way, which makes some lengths, which may also result from this, quite forgivable. The conversations between Franz and Freud, who is embodied routinely and charmingly by Bruno Ganz, are particularly enjoyable. Franz has great respect for the great thinker, but his advice doesn't always jibe with what he experiences in Vienna. He must quickly rid himself of his youthful naivety and grow up in order to hold his own in a world that is changing far too quickly. This goes far beyond his love for Anezka, which of course makes the development of this character enormously exciting - not only for a psychoanalyst like Sigmund Freud, but also for the moviegoer.

The Trafikant may not live up to its full potential. But in the end, the strengths clearly outweigh the few weaknesses. Not quite a great film, but unfortunately quite topical and important, while also quite entertaining. And that is then also quite clearly still: Worth seeing!

Cinema trailer for the movie "The Trafikant (Deutschland/Österreich 2018)"
Loading the player ...