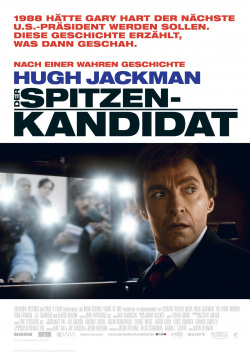 He was considered one of the very best hopes for the Democrats in the campaign for the presidency. But as meteoric as the rise of charismatic Senator Gary Hart (Hugh Jackman) was in the late 1980s, his fall from grace was equally unforgiving when the press caught wind of an alleged affair involving the politician. Though his wife (Vera Farmiga) stands by him steadfastly, Hart becomes the first political victim of tabloid journalism. And though Hart vehemently defends his beliefs, he can't shake the dark shadow the affair has cast over his credibility, and he must make a momentous decision.

The Top Candidate tells a true story that few in this country are likely to know. But the influence that the events surrounding the U.S. senator had on the tabloid press' treatment of politicians is something we've long felt here in Germany as well. Therefore, director Jason Reitman has not only succeeded in making a stirring but also relevant political drama. Because especially in today's media landscape, private missteps and gaffes of politicians seem to play a much bigger role than their actual work. This is, of course, a grievance that needs to be talked about.

However, the film also sheds light on the other side and stimulates the viewers to an intense as well as important discussion: Is the integrity of a man or woman holding political office still a given if he or she does something morally reprehensible - even if it only affects the private life of the person in question? Can a private person be separated from his or her office without further ado - or should that even be the case? But if so, why is a Donald Trump president of the United States?

Dramaturgically, then, The Frontrunner can already score points for its topicality. But also in terms of acting the production is on a very high level. Apart from the fact that Hugh Jackman's hairstyle looks a bit too much like a wig, the Australian delivers a first-class performance, supported by a really great ensemble. The rousing acting then also transfers the other strengths of the script to the screen very well. If you appreciate clever and intelligent political dramas with high entertainment value, you should definitely give your vote to this top contender. Absolutely worth seeing!

Cinema trailer for the movie "The Frontrunner (USA 2018)"
Loading the player ...