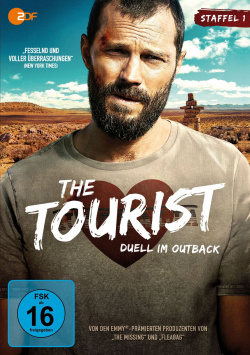 The Tourist - Duel in the Outback - Season 1 - DVD

Content: After a car accident in the Australian outback, a man (Jamie Dornan) wakes up in a hospital without any memory. Not only does he no longer know what happened. He has also completely forgotten who he is and what his name is. The search for his identity leads him to a café, where he narrowly escapes a bomb attack. His acquaintance with the waitress Luci (Shalom Brune-Franklin) seems to bring him a little closer to the truth. While he and Luci now search for further clues together, the shy police trainee Helen Chambers (Danielle Macdonald) also sets out to solve this tricky case. But time is running out, because a mysterious killer (Ólafur Darri Ólafsson) is breathing down the stranger's neck and could pose a threat to anyone who helps him in his search for the truth...

As much as I love classic crime series, I'm delighted when there are genre entries that try to break out of the usual patterns and come up with new ideas to ensure that viewers can join in the fever and puzzle. "The Tourist - Duel in the Outback" is exactly such a series. Certainly, the idea that a protagonist loses his memory and has to put together the puzzle pieces of his past is not new. The most prominent example would be Jason Bourne. But even if there may be some parallels, the series manages very well to always go its own way and to surprise its audience again and again.

This is largely due to the excellent drawing of the characters, who not only develop over the course of the six episodes. Many a character also changes in a completely new direction over the course of the season. This provides the necessary surprise effects again and again to maintain the tension throughout. The whole thing is spiced with a great visual language and wonderful humor, which sometimes takes on wonderfully biting features.

In addition to "Fifty Shades of Grey" star Jamie Dornan, who delivers a truly multi-layered performance here, Danielle Macdonald is particularly convincing as the investigator, who faces wind from all sides - but especially from her not exactly sympathetic fiancé, who does everything to keep Helen down. Macdonald, who is known to a wider audience from the Netflix hit "Bird Box" among others, plays the young woman's struggle against the constant oppression from her boyfriend and her colleagues just great. In her strong will to assert her sense of justice, she always remains charming and sympathetic, which also means that she soon gets closer to the mysterious stranger.

"The Tourist - Duel in the Outback" is exciting, bloody, humorous, original, first-class acting and rousingly staged. This is what real quality television looks like. Anyone who likes entertaining mystery thrillers with exciting twists and bitter-bitter humor should not miss this series highlight. Absolutely worth seeing!

Picture + Sound: The first season was only sighted as a stream, no final rating can be given here about the image and sound quality.

Extras: Also the bonus material could unfortunately not be sighted. Announced is an approximately 17minütiges Making of.

Conclusion: "The Tourist - Duel in the Outback" is a thrilling thriller series that grabs, surprises and first-class entertainment with great pictures, an excellent ensemble, clever plot twists and a small pinch of humor. The six episodes of the first season are spread over two DVDs, which also feature a bonus making of. A clear case of: Absolutely recommended!

Cinema trailer for the movie "The Tourist - Duel in the Outback - Season 1 - DVD (Australien / USA / Großbritannien 2022)"
Loading the player ...