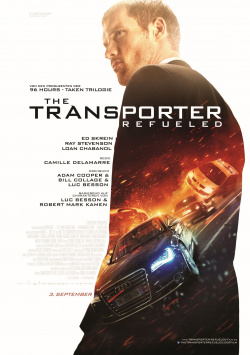 Frank Martin steps on the gas again! However, in the fourth film in the series, it's not Jason Statham behind the wheel as the Transporter, but newcomer Ed Skrein. He plays a younger version of the taciturn driver who always completes his assignments with absolute precision and discretion. He doesn't let car thieves and other villains stop him. The only one who can upset him is his father (Ray Stevenson). He catapults Frank into a new adventure when he is taken hostage by the mysterious and seductive Anna (Loan Chabanol). She and her squad of female mercenaries want Frank to help them take down a group of Russian human traffickers. Now Frank, with the support of his father, must cooperate with the militant ladies. At that point, however, they have no idea what kind of ruthless and powerful enemy they'll be up against...

Let's face it: this Frank Martin would have Jason Statham wiping the floor in passing. Ed Skrein can't match his predecessor in terms of charisma, or coolness. And also the fight sequences seemed somehow more explosive and convincing with Statham than with his younger colleague. So it doesn't seem to have been a good idea to rejuvenate and reboot the successful action franchise with The Transporter Refueled. Because the story is also not very original and the characters - especially the villains - are drawn in an arguably clichéd way. And yet there are some aspects that ensure that the film works quite well and offers a decent entertainment value.

The main reason for this is Frank's father, who is embodied by Ray Stevenson (Thor, The Destiny) with exactly the charming nonchalance that the very pale Ed Skrein lacks. In some scenes he even manages to create a little James Bond feeling. The scenes with Frank Senior are extremely entertaining and worth watching - even if it doesn't necessarily speak for the film that a supporting character completely steals the show from the leading man.

Another plus point of the film are the wonderful locations, which like the fast cars and the beautiful women are pleasant fodder for the eyes. Director Camille Delamarre does a good job of covering up the script's weaknesses with stylish staging. Some well-executed action sequences also help a lot. True, these sometimes defy all rules of logic and gravity and also feature minor editing errors. But fun they are all the same.

Despite these positives, there is simply no denying that The Transporter Refueled is not a particularly good film. A weak lead actor, flat dialogue, a clichéd dramaturgy from the drawing board - all this even pretty pictures, decent action and a few moments of pleasant self-mockery can not fully compensate. Especially since comparisons with the Statham films simply can't be avoided. And even if they don't exactly belong to the highlights of modern action cinema, they still feature an extremely cool title character. Without the Transporter label, the whole thing would definitely be entertaining action fun in front of a beautiful backdrop. As a reboot of the successful series, however, this mission unfortunately failed. That's why in the end there is only one: still worth seeing with some clear cutbacks!

Cinema trailer for the movie "The Transporter Refueled (Frankreich 2015)"
Loading the player ...