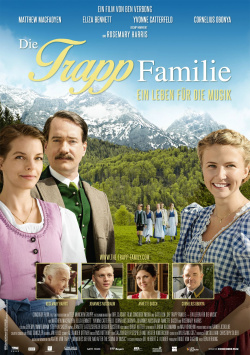 The Trapp Family - A Life for Music

Since the death of her mother, dark clouds have moved over the previously tranquil life of Agathe von Trapp (Eliza Bennett). She takes on the role of mother to her siblings, while their father Georg von Trapp (Matthew Macfadyen) withdraws more and more in his grief. Only when he falls in love with the nanny Maria Gustl (Yvonne Catterfeld) and gains new hope for a happy future, does he also try to persuade Agathe to finally break out of her protective role and follow her own dreams. Only slowly does she agree and begins to sing again, which she had given up after the death of her mother. Together with her family she wants to teach people the power of music. But then the fascism of Hitler's regime spreads from Germany to Austria, and Georg must make a drastic decision for his family that will change their lives forever.

Director Ben Verbong directed a TV movie about the story of Hans and Lotte Hass a few years ago, starring Yvonne Catterfeld. His latest film, in which Catterfeld also plays one of the central roles, strikes the same chord in every respect - both in terms of dramaturgical structure and the style of staging. The Trapp Family - A Life for Music is, after two successful Heimat films in the 1950s and the multiple Oscar winner Meine Lieder - Meine Träume, another film about the Trapp family, who as a singing group in the late 1930s in the USA have made an incredible success story. Loosely based on the memoirs of Agathe von Trapp, the eldest daughter of the family, the film tells the story of the family up until their escape from the Nazi regime to the USA. The whole thing is framed in the best Titanic manner by a subplot set in the present, in which the old Agathe tells her granddaughter about her youth.

This is all very routinely staged and decently acted. But this film hardly has any cinematic qualities. The dramaturgy is a mere stringing together of clichés and skilfully avoids going into depth in even one aspect. Thus, not only the characters, but also their story remain extremely superficial. Moreover, the whole thing also comes across as completely emotionally undercooled. Moments like the one in which Agathe sings for the first time in years - and then in front of her great idol - are actually predestined to give the audience goose bumps. But especially in such moments the production lacks the heart and the passion that such a story would actually need to be able to actually touch the audience.

Also the imagery and the set are more reminiscent of a TV production than of a major motion picture. Especially the majestic mountain landscapes of Austria would have actually offered an opulent cinematic panorama. But here, too, things are cooked rather on the back burner. Matthew Macfadyen as well as Yvonne Catterfeld or Eliza Bennett obviously try to deliver powerful performances despite all these limitations. But unfortunately the script is far too weak for that and the staging too much of a pattern for anything really strong to unfold here.

Whoever just needs some kitsch and heartbreak, a tiny bit of music and very stale drama to enjoy a nice evening at the movies, might well be entertained here. But if you expect a gripping biography on cinema level or if you want to know more about the success story of the Trapp family in the USA, you will be disappointed by this movie for sure. And therefore there is also only one: Conditionally worth seeing

Cinema trailer for the movie "The Trapp Family - A Life for Music (Deutschland/Österreich 2015)"
Loading the player ...