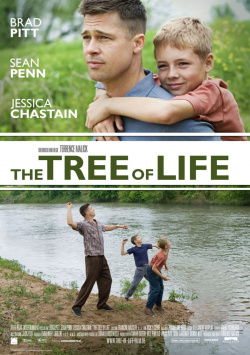 The Tree of Life

Although there are definitely some aspects by which the quality of a film can be measured, cinema is always an absolutely subjective experience. Films that are not really good from an objective point of view can therefore become big box office successes, because they appeal to a wide audience in their own unique way. On the other hand, it can also be observed time and again that works that are excellent in terms of both craft and content simply do not succeed in winning over viewers. And almost everyone should have at least one film in their personal best list that they should be ashamed of, but which is still fun to watch. There's just no accounting for taste, as we all know.

Why this long preface? The reason is not necessarily that The Tree of Life, the new film by Terrence Malick, has been highly polarizing since its premiere at Cannes. Rather, it's the observation that many critics and cinephiles claim that anyone who doesn't praise The Tree of Life as a masterpiece and recognize its significance either doesn't understand the film or doesn't know anything about cinema. I would like to counter this with the bold thesis that it is entirely possible to find this film boring or simply consider it inconsequential if you understood it or love cinema per se.

The Tree of Life does not tell a story in the classic sense. Rather, it's a rush of images that captures life in an American family in the 1960s. What looks like a pure idyll at the beginning gets more and more obvious cracks. Especially the bossy father (Brad Pitt) raises little Jack and his siblings with a hard hand, while the mother (Jessica Chastain) gives her children love and tenderness. Increasingly, Jack's childlike joy in life gives way to anger and incomprehension toward his father. When confronted with the death of a loved one, Jack's soul also threatens to lose the last hold it had left - a circumstance that even the adult Jack (Sean Penn) struggles with many years later.

urely, the images Malick has conjured on screen with his cinematographer Emmanuel Lubezki are mesmerizing. The music by Alexandre Desplat is beguiling. Many of the snapshots shown in the film are highly recognizable to most viewers. One often feels reminded of one's own childhood and realizes that the film actually conveys something of a universal truth. Life with all its ups and downs, from birth to death, filled with love, but also hatred, anger and disappointment, is packed into a truly unique visual language here without any big words. And the actors, first and foremost an extremely convincing Brad Pitt, are also beyond criticism.

However, there are always moments when Malick tries the patience of (some) viewers, such as when he has his protagonists constantly address some kind of question or message to God or a similar superior power in meaningful whispers. Or when he includes a twenty-minute digression about the origin of the universe - including cute dinosaurs. This too is visually intoxicating, but feels more like a documentary built into an art installation. Or there's the ending, which in any other film would be reviled as the worst kind of kitsch, but here is meant to be an enchanting consequence of precious staging. Sure, some viewers see quite great art and an important message in all of this. But the whole thing can just as easily be seen as a pretentious work with self-indulgent tendencies by a director who wants to tell his audience, in his own unique way, that he has found God.

It's nice if there are people who find some fulfillment in The Tree of Life, who can lose themselves in the rush of images to such an extent that they can take something from the film into their own lives. But those who can't do that and merely leave the cinema bored at a high level don't necessarily have less of an idea about the medium of film, or are even dumber than those who see Malick's film as a revelation of the cinematic kind. Especially with this very personal film by the exceptional director Malick, it's his own, very individual experience that counts, which is superior to the partly great craftsmanship of the work and every hymn of praise from the feuilleton. Therefore, if you like to be intoxicated by images in the cinema and have a certain inclination towards spirituality, you shouldn't miss The Tree of Life. But if you need at least a hint of a story in the classical sense for an entertaining evening at the movies, and if you quickly get on your nerves with constant whispering, you will definitely cut your teeth on this work.