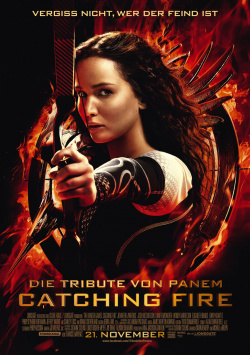 The Tributes of Panem - Catching Fire

The wait is over - The Hunger Games finally enters its second round. Actually, Katniss Everdeen (Jennifer Lawrence) and Peeta Mellark (Josh Hutcherson) had won their deadly Hunger Games, which was supposed to guarantee them a carefree future of prosperity and safety. But of course, Katniss standing up to the Capitol, and by extension President Snow (Donald Sutherland), isn't going to be taken lightly. Especially as it becomes clear that Katniss' courage has also spread to the inhabitants of the various districts and that an uncontrollable uprising is beginning to bubble up in the subjugated population. To nip this in the bud, Snow is willing to use any means necessary. He even goes so far as to change the long-established rules of the Hunger Games and send all the previous winners back into the arena in an epic battle. So Katniss and Peeta must once again fight for their lives, this time against the best of the best. But it quickly becomes clear that these Hunger Games are only a small part of a much larger plan, the thwarting of which could change the fate of the Districts forever.

With the film adaptation of the first volume of Suzanne Collins` Panem trilogy, Gary Ross had landed a worldwide blockbuster in 2012. Even if the success in Germany fell a little short of expectations, a worldwide box office result of almost 700 million dollars on a budget of 78 million dollars is absolutely respectable. So it's no wonder that the adaptation of volume 2 should go over as quickly as possible. Although the budget was increased a bit, Ross took his hat off as director. Time constraints got in the way of his artistic vision, which is why Francis Lawrence is now taking his place. And as talented as Gary Ross is as a director, the change has absolutely benefited the series. It's noticeable visually alone. Where Ross used a somewhat exhausting shaky-cam look, Lawrence goes for a dystopian opulence that simply makes The Tributes of Panem - Catching Fire seem bigger and more spectacular than its predecessor.

At the same time, Lawrence also takes more time to develop the dramaturgy. His film doesn't seem as rushed as it seemed in parts of Part 1. At least fans of the novels will be pleased that the film sticks closely to the book. For viewers who don't seem familiar with the books, the first hour might drag a bit. But even though there isn't much narrative pace here, the slow development is very important for the further course of the story and especially for the characters. It's very positive that the film takes the time to show what effect the events of Part 1 had on Katniss, on Peeta, on Haymitch, and on the inhabitants of each district. For although one might think that this is just a rehashing of the story from the first book with slight variations, on closer inspection the whole thing is a clear progression that slowly but surely leads the viewer towards the events that will take centre stage in the final two films.

In order to present the brutality that occurs in the books in a way that is appropriate for the target audience, Ross had also gone for a rather shaky visual in the scenes in the arena. In Lawrence's case, some scenes that would have led to a higher age rating had they been too detailed are simply implemented a little darker. As a result, the viewer can only guess at a lot of things, but this hardly detracts from the suspense and effectiveness of the whole thing. The Tribute of Panem - Catching Fire allows at least the fans a very intense immersion in the world of Katniss Everdeen - and thus the film has fulfilled its mission fully.

That this is to some extent a quality product, also shows the good cast. Jennifer Lawrence, who has risen to Oscar-winning status since Part 1, falls short of her potential here as she did in the prequel, but proves to be a much more convincing and multi-faceted actress than, say, Kristen Stewart - Bella fans may forgive me - from Twilight or Lily Collins from the Chronicles of the Underworld. With the likes of Philip Seymour Hoffman, Donald Sutherland and Stanley Tucci at her side, even weaker performances like Liam Hemsworth's are easy to get over. Sure, none of this is Oscar-worthy. But measured against other representatives of this genre The Tribute of Panem - Catching Fire is simply already acting well above average.

In total, Francis Lawrence has delivered a very good adaptation of the second book. It has become a thrilling vision of the future, in which the target-group-appropriate romance is served in tolerable doses and other, much more exciting aspects are more clearly in the foreground. The effects, the music, the actors and last but not least the script, which only very occasionally resorts to somewhat turgid dialogues - in all these aspects The Tribute of Panem - Catching Fire can convince. Thus, the film is not only one of the more successful blockbusters of this year, but also one of the rare cases where a sequel is better than the first part. If you liked part 1, you'll love part 2, which is why it's a clear worth seeing for fans!

Cinema trailer for the movie "The Tributes of Panem - Catching Fire (USA 2013)"
Loading the player ...