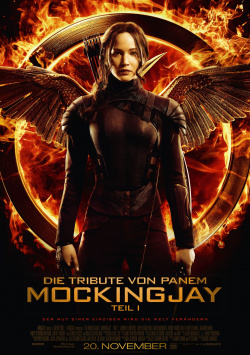 The Tributes of Panem - Mockingjay Part 1

Katniss Everdeen (Jennifer Lawrence) may have escaped certain death in the arena during the Jubilee. But that doesn't mean the battle against the Capitol and President Snow (Donald Sutherland) is won. On the contrary: to demonstrate his strength, Snow has had the entire District 12 destroyed. Gale (Liam Hemsworth) was able to get a few of the residents to safety, including Katniss` mother (Paula Malcomson) and her little sister Prim (Willow Shields). In the underground catacombs of District 13, which was thought to be destroyed, the survivors, led by President Alma Coin (Julianne Moore), prepare for a decisive battle against the Capitol. But the rebels need a leader - and that can only be Katniss. But she's not sure who she can trust anymore after the events in the arena. Only when she learns that Peeta (Josh Hutcherson) is still alive and apparently being abused by Snow for his own purposes, is she ready to take up the fight again - a fight that will soon claim many victims.

Now, after the enormous success of the novel trilogy and the first two cinema adaptations, The Tributes of Panem - Mockingjay Part 1, the third film about Katniss Everdeen, eagerly awaited by fans, is finally coming to the cinemas. As is currently customary, the last book in the trilogy is being split into two films for the cinema. What worked well for Harry Potter and the Twilight saga is guaranteed to ensure full box offices for the film studio again. But especially with Mockingjay, it becomes abundantly clear that the decision to split the film into two has no artistic reasons whatsoever, only purely financial ones. Because although the film has many strong moments and it is really made first-class craftsmanship, it suffers from the fact that it was taken away any dramaturgical climax with the brilliant finale.

Who knows the book, knows that there are also in the first half quite suspenseful and very emotional scenes. Francis Lawrence then did a great job with these. The Hanging Tree scene alone will give many fans goose bumps. Here Lawrence succeeds first-class, by the connection from music and pictures constantly rising emotions to produce. The attack on a military hospital in District 8 is also a very effective scene, where all of the film's strengths clearly shine through. The effects, as well as the set design, camerawork, and of course the actors are all fully convincing here.

Even if especially Jennifer Lawrence in some scenes a little too thick and Liam Hemsworth acts arg stiff, the acting performances leave a very positive overall impression. Elizabeth Banks in particular is quite wonderful as an Effie Trinket distraught by the fashion disasters in District 13. All in all, yes, it all sounds like a really successful bestseller adaptation. Nevertheless, a somewhat disappointing aftertaste remains at the end. Because dramaturgically the good and effective moments are blown up by a lot of hot air to an unnecessarily long running time of two hours. This wouldn't be a big deal if the film had a real climax. It lacks a standalone story arc, such as the first part of Harry Potter and the Deathly Hallows had. Instead, this is just setting up the grand finale and before things get really exciting, the credits roll.

No question, The Tributes of Panem - Mockingjay Part 1 is atmospherically superb. But the rather poor dramaturgy makes it clear that the book is simply too little material for two films. If the makers had decided against the financial exploitation of the template and for a three-hour finale, then Mockingjay could have been without a doubt the best part of the film trilogy. As it is, however, the whole thing is a too obviously drawn-out prelude that offers plenty of good moments but just no satisfying climax. That's a bit disappointing, but for fans of the books and the first two movies there are still enough positive aspects to make a visit to the cinema worthwhile. And that's why there is still a deserved: Worth seeing

Cinema trailer for the movie "The Tributes of Panem - Mockingjay Part 1 (USA 2014)"
Loading the player ...