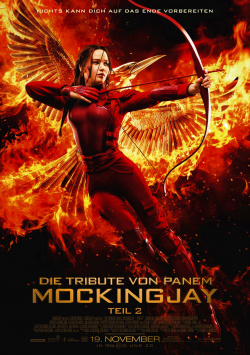 The Tributes of Panem -Mockingjay Part 2

The Battle for Panem enters its final round. After everything President Snow (Donald Sutherland) has done to Peeta, Katniss (Jennifer Lawrence) wants him dead. Although President Coin (Julianne Moore) actually has other plans for the mockingbird, Katniss has only one goal: she wants to go to the Capitol to single-handedly put an end to Snow's reign of terror. To do so, she joins a task force led by Gale (Liam Hemsworth) and Finnick (Sam Claffin). With the help of other resistance fighters they make it to the Capitol. But there, Snow has already laid out several deadly traps to kill Katniss once and for all, depriving the insurgents of their hope. Just short of their goal, Katniss seems no match for her adversary, his bombs and mutations after all.

The Tributes of Panem - Mockingjay Part 2 picks up right where Part 1 left off. And after the events there dragged on badly without offering a real climax, the first few minutes of this finale definitely give you the feeling that things will continue in the same way here. But luckily this is a mistake, because in the end this second part of the last book adaptation does everything right that part 1 did wrong. The tension and pacing are right here, and especially in the second half, the whole thing grows into a great adventure that, especially visually, outshines anything you've been treated to in the Panem movies so far. Sure, there are still a few small lengths during the course of the nearly two and a half hour running time. And also the dialogues are sometimes very cliché. And yet, this finale is extremely rousing and quite emotional. But what is especially pleasing is the fact that the makers keep very closely to the quite drastic novel. Admittedly, the brutality is kept at FSK 12 level by quick camera pans and cleverly placed cuts. But overall, the battle that Katniss and her companions have to fight out in the Capitol is surprisingly relentlessly implemented. One sequence in particular towards the end of the confrontation is undoubtedly one of the most haunting moments in the series.

What also makes the film very interesting is the message behind all the action and effects spectacle. What was foreshadowed in the last film is now becoming more and more apparent. The lines between good and evil are blurring so much that in the end, a victory over Snow would not necessarily equal a victory for the people of Panem. And Katniss is left to wonder if she hasn't just been duped into thinking she's getting her own way and getting her own way - or if she's just been very cleverly manipulated. Of course, her reaction to this is as predictable as the unnecessary happy ending epilogue. But director Francis Lawrence manages very well to wrap up the ethical, political and moral questions this story raises in a gripping and thoroughly clever way, despite all the clichés and predictability. So the finale, shot in large parts in Berlin, not only looks good and offers really good moments of suspense, but it also doesn't offend the audience's intellect. And that's not really a given in a film of this genre.

The Tributes of Panem - Mockingjay Part 2 brings the story of Katniss Everdeen and her fight for the freedom of Panem to a more than satisfying conclusion. There's no question that the film won't win any new fans. And neither the screenwriters nor the actors will be able to take an Oscar for their performances. But for fans this last part has become exactly the film they were expecting: a gripping adventure with a strong heroine, great effects, emotional moments and a beautiful ending that closes the circle perfectly. For this there is then also a deserved: Absolutely worth seeing!

Cinema trailer for the movie "The Tributes of Panem -Mockingjay Part 2 (USA 2015)"
Loading the player ...