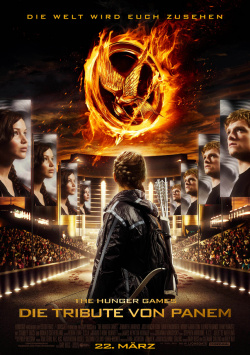 The Tribute of Panem - The Hunger Games

The Tribute of Panem trilogy by Suzanne Collins is, along with the Twilight books, one of the most successful young adult book series in the world. And so, after the enormous success of the film adaptations of Stephenie Meyer's books, it was really only a matter of time before Panem would also make the leap to the big screen. Due to its rather dark and brutal story, it was to be feared that the audience would only get to see an extremely softened adaptation, in which more focus would be placed on the romantic aspect of the story, in order to be able to appeal to the same target audience that has flushed so many millions into the coffers of the Twilight makers. But even if a certain weakening of the intensity of the novel can be observed, the film adaptation has become overall a very successful and faithful to the work of the first volume.

The story is set in a bleak future where the country ruled by the wealthy Capitol is divided into twelve districts. To constantly remind the inhabitants of the Districts of Panem, subjugated after a failed rebellion against the Capitol, that revolution does not pay, two children from each of the Districts must battle each other in the Hunger Games year after year. The winner will win fame and fortune - but the other participants will not survive the bloody games. When little Prim Everdeen is drawn for the games in District 12, her older sister Katniss (Jennifer Lawrence) volunteers to take her place in the fight to the death. Along with the baker's son Peeta (Josh Hutcherson), who is also drawn, Katniss is taken to the Capitol to be prepared for the games. Even at the parade, the two manage to attract the most attention. But even though this increases their favor with the audience and possible sponsors, it hardly improves their chances of survival - especially since Katniss and Peeta know that they will have to become fierce opponents in the arena at the latest if they want to return to their district as victors. May the games begin...

Director Gary Ross (Pleasantville) was faced with a difficult task in adapting the popular novel: on the one hand, he wanted to do justice to the original and stick as closely as possible to Suzanne Collins' ideas. On the other hand, the film was not allowed to be too brutal and bloody in order to achieve an age rating that would allow the target audience to see the film. And indeed, he and his team succeeded in finding just the right tone. With the help of camera pans, quick cuts and clever angles, everything that is described in the book is actually shown in the film without the viewer seeing too much blood and brutality. So if you were afraid that The Hunger Games would come across watered down in the movies, you can breathe a sigh of relief. However, if you were hoping for the camera to go full on with every death in the arena, you're guaranteed to be disappointed.

But of course, it's not just the bloody battles of The Hunger Games that make the film. The fine set, whether it's in District 12, the Capitol, or the arena, the costumes and makeup make it clear how closely the makers have stuck to the original. Sure, there are small changes and streamlining. For instance, the audience doesn't learn what happens to the bodies of the dead during the Hunger Games. Katniss' family background, especially her father's death and her mother's subsequent behavior, is only touched on in passing, so those unfamiliar with the novel may be at a bit of a disadvantage at such points. And a small but significant change has also been made to bloodthirsty creatures towards the end of the film, but this is of limited importance to the story itself. The makers have cleverly avoided any really disturbing cuts or changes.

The casting is also perfectly satisfactory. Granted, Jennifer Lawrence looks perhaps a little too suffering in some scenes, but the bottom line is that she is perfect casting for the struggling Katniss Everdeen. That's because she's not emotionless and pale despite barely changing facial expressions. You can tell that Katniss has to fight not only physical battles, but internal ones as well, and that makes this character a real one to identify with on screen as well, especially for younger female viewers.

With Stanley Tucci, Woody Harrelson, Elizabeth Banks or Donald Sutherland the supporting roles are also very well cast. Alright, still Sutherland as President Snow is not scary enough to make him a superior villain. But the groundwork is there and you can already look forward to Snow becoming Katniss' overt antagonist in the very likely sequels.

Also, as in the book, the possible romantic triangle between Katniss, Peeta and Gale is only hinted at. So the makers have avoided turning the story into a big teen romance, which the book simply isn't, but which might have been easier to market. No, instead the film is a tense survival thriller with apocalyptic sci-fi traits, some drama and just a dash of romance. Everything in such well balanced doses that the film not only appeals to teenagers, but can also entertain an older audience. This is an extremely successful start for a franchise that will hopefully be continued with the same quality. Not only, but especially for fans of the novel absolutely worth seeing!!!

Cinema trailer for the movie "The Tribute of Panem - The Hunger Games (USA 2011)"
Loading the player ...