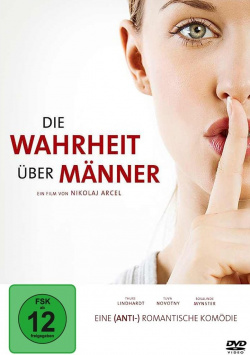 The Truth About Men - DVD

Film: Screenwriter Mads (Thure Lindhardt) leads a very regular life. He is in his early thirties, has a decent paying job in television and has been living with his pretty girlfriend Marie (Tuva Novotny) for ten years. Yet Mads is not happy with his situation. He longs to return to the days when he successfully wrote for the movies and even his personal life was exciting. Now everything is as predictably contrived as the scripts he now works on. And so Mads decides that he has to change something fundamental about his life. He breaks up with Marie and quits his job, hoping that now he can finally make all his dreams come true. Too bad he doesn't know exactly what they should be. And so Mads heads more and more towards his lowest point, until he meets the much younger Julie (Rosalinde Mynster) and begins a wild love affair with her. At last he seems to have found great happiness - or does the script of his life perhaps still have some unpleasant surprises in store for him?

The Truth About Men was one of the very big surprises of the cinema year 2012. It is not a big blockbuster, no feel-good cinema suitable for the masses, but a small, extremely original film about the many pleasant and unpleasant truths with which not only men are confronted in their lives. This is, of course, the stuff that countless romantic comedies are knitted from. And in principle, the plot of Nikolaj Arcel's film is also just another variation on this theme, with the story of Mads and his search for happiness and love reminiscent at many moments of the German comedy Liegen lernen.

But what sets this film apart from comparable works is its deliberate and very clever play with conventions. As a screenwriter, Mads always thinks in terms of the formulas common to his work, always recognizing in his actions the classic patterns of common storytelling in cinema. This is explained again and again with excerpts from the three films for which he wrote the scripts, which makes for many an extremely amusing moment. A very special role is played by his most successful work, the animated film The Search for Zekaja. In it, a boy searches for a legendary island that represents the epitome of happiness for him. Mads, like the hero he wrote, is himself in search of his Zekaja. This is once the girl he was hopelessly in love with at school and who has been the epitome of unfulfilled dreams for him. Later it's Julie, then Marie again. But whenever he thinks he has found his Zekaja, this illusion is viciously shattered by reality. For, of course, as an author one has no influence on reality.

Another plus point is the cast, with Thure Lindhardt and Rosalinde Mynster being particularly convincing in their roles. A nice detail: the roles of the characters from the films written by Mads have been cast with very prominent faces from the Danish film and TV scene, which will be especially noticeable to fans of Danish TV series like The Bridge or Borgen.

As the title suggests, The Truth About Men is indeed full of truths, though not always limited to men. Some of them are very universal truths about life, happiness and love. The whole thing is conveyed completely without kitsch and ends with a consistently realistic, yet simply wonderful conclusion that shows that the happiness you seek is usually quite different from the one you dream of. Lovers of sophisticated comedies and those viewers who appreciate Nordic entertainment cinema should definitely not miss this wonderful film, which delights with its original humor, charm and a whole lot of heart. Absolutely worth seeing!!!

Picture + Sound: As was to be expected for a quieter comedy of this kind, the technical realization is on a good, but not spectacular level. The sound is extremely restrained for long stretches and has few surround effects to offer. The dialogue and music are well-matched and sound clearly understandable from the speakers. The image is clean, the overall sharpness is on a good level and only in the detail representation there are minor weak points here and there. Overall, therefore, not particularly impressive, but good!

Extras: Unfortunately, except for the trailer, the DVD has nothing to offer bonus material. Too bad!

Conclusion: The truth about men could unfortunately hardly convince in the cinema. But perhaps this wonderful and highly original comedy will succeed on DVD to find the audience it deserves. Although the technically well implemented DVD has no extras worth mentioning to offer, but the film alone is enough to pronounce a clear purchase recommendation. Absolutely recommendable!