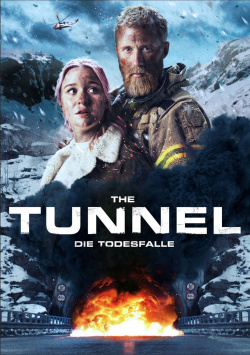 The Tunnel - The Death Trap

Actually, widowed firefighter Stein (Thorbj&oslash;rn Harr) wanted to celebrate Christmas for the first time this year with his daughter Elise (Ylva Fuglerud) and his new girlfriend Ingrid (Lisa Carlehed). However, Elise is less than thrilled about this. After an argument with her dad, she desperately sets off on the express bus to Oslo to visit her grandmother. But she doesn't get far, because the bus gets stuck in the nearby Storfjell tunnel due to an accident involving a tanker truck. When the tanker truck then explodes, the tunnel turns into a death trap, and not just for the coach's occupants. As a snowstorm hinders the rescue work, it is now up to Stein to save his daughter's life.

"The Tunnel" is after "The Wave - The Death Wave" and its sequel "The Quake - The Great Quake" the third disaster film from Norway, which does not have to hide behind the well-known role models from Hollywood. Certainly, the wheel is not exactly reinvented here. Especially the conflicts of the main characters are very cliché. In addition, there are some characters and plot lines that hardly play a role in the actual story and seem like completely unnecessary filler. Here director P&aring;l &Oslash;ie could have gladly applied the scissors a few times.

Despite this: On a visual level alone, "The Tunnel" has some really great moments to offer. Within the tunnel, &Oslash;ie manages very well to build up a really claustrophobic atmosphere that's hard to escape - even if some of the characters don't exactly behave in a comprehensible way (you might argue now that people rarely behave rationally in exceptional situations. But still, as a viewer, you'll find yourself scratching your head at times). And also outside the tunnel, the cameras have captured some great images, which are able to establish a rousing mood right from the start.

"The Tunnel" is a really decent representative of the disaster movie genre. All the strengths, but also many weaknesses of the subject are served here. Overall, though, the positives outweigh the negatives: The script may have weaknesses, but the visual realization is great, the atmosphere gripping and the actors - especially Thorbj&oslash;rn Harr, known from the series "Vikings" - are quite convincing. So if you like disaster movies and are looking for some entertaining fodder for the eye, "The Tunnel" can be warmly recommended. Worth seeing!

"The Tunnel" will be available as VoD on all major providers such as iTunes or Amazon Prime Video on February 16, 2021.

Cinema trailer for the movie "The Tunnel - The Death Trap (Norwegen 2019)"
Loading the player ...