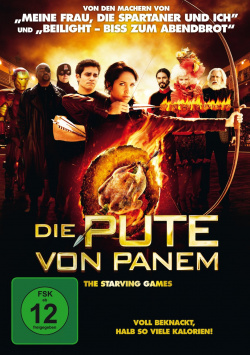 The Turkey from Panem - The Starving Games - DVD

Film: It had to be that way. After the infamous directing duo Jason Friedberg and Aaron Steltzer ("Date Movie") already pulled the popular "Twilight" series through the cocoa with "Beilight - Bi(s)s for dinner", now "The Tributes of Panem" must believe in it. In "The Turkey of Panem" they send the young Kantmiss Evershot (Maiara Walsh) to the Starving Games hosted by the evil President Snowball (Diedrich Bader). To win here would bring her family much-needed food and fame. But Kantmiss also likes to make her opponents cold in front of the camera or to fool around with her District 12 colleague Peter (Cody Allen Christian). But is that really enough to win these games? And why do superheroes, sorcerer's apprentices or country singers suddenly appear in the arena? Is your talent for archery sufficient for Kantmiss to survive this chaos alive?

Whoever has seen a film by Friedberg and Steltzer knows what is on offer here. Poor actors, as many fart, diarrhea and full-on-the-nuts gags as possible, as well as the completely pointless accommodation of allusions to other movies or various short-term phenomena of pop culture, such as Korea's hit export Psy. It doesn't matter that it's only conditionally funny when bad "Expendables" doubles appear or Kantmiss shoots the main character from "The fantastic world of Oz" with one of their arrows. Here, the wooden hammer is used to distribute what the stuff holds. There is a relatively large audience that finds this kind of humor funny. And such viewers are also allowed to laugh at gags like an unimaginative "Avatar" parody. But from an objective point of view a movie like this is just bad in its craftsmanship and a bit annoying in a way.

Annoying because a movie like "The Tributes of Panem" would have offered potential for a much more clever and funny parody. In the beginning, this can even be seen here from time to time, for example when it comes to the sponsors of the Starving Games. But whenever a good laugh gets lost in the chaotic events, the next faecal joke immediately destroys it. Jason Friedberg and Aaron Steltzer still don't seem to have understood that a good spoof comedy doesn't just consist of showing the viewer something he knows and underlining it with funny fart noises.

As movies like "Die Pute von Panem" can be produced fast and cheap, which you can clearly see in the work, spoof comedies like these will unfortunately continue to be produced as long as money can still be earned with them. Who could laugh heartily about "Beilight - Bi(s)s for dinner" or about "My wife, the Spartans and me", will surely have a lot of fun with "Die Pute von Panem". If humor doesn't only take place in the digestive tract, but also in your head, you should avoid this movie very much. Therefore: only worth seeing for real Friedberg/Steltzer fans!

Picture + sound: From a purely technical point of view, the film is completely convincing. The image sharpness is very good, the colours pleasantly powerful and the contrasts well tuned. No soiling or image noise is visible. The sound is in a dynamic Dolby Digital 5.1 mix, which has some good surround effects in addition to the well mixed dialogues. Good!

Extras: The DVD has about 15 minutes of bonus material to offer. Besides the trailer and a short look behind the scenes (about 4:18 min.) there are some uncommented B-Roll recordings (about 2:20 min.), outtakes (about 3:54 min.), as well as interviews with Brant Daugherty (about 1:54 min.) and Ross Wyngarden (about 2:08 min.). Unfortunately, there are no subtitle options available for all these extras.

Fazit: "The Turkey of Panem" is a typical Friedberg/Steltzer comedy that gives away much of its potential in favor of deeper faecal jokes. This may bother lovers of classic spoof comedies and all fine spirits, but fans of the films of the infamous directing duo will get their money's worth again. Who could laugh cordially about "Beilight - Bi(s)s zum Abendbrot" or about "My wife, the Spartans and I", can buy this technically well converted DVD confidently

Cinema trailer for the movie "The Turkey from Panem - The Starving Games - DVD (USA 2013)"
Loading the player ...