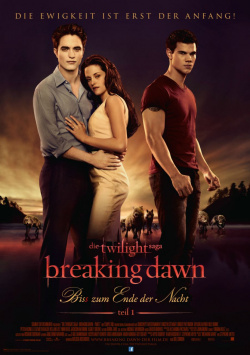 The Twilight Saga is heading towards its inevitable conclusion. Following in the successful tradition of Harry Potter, the final volume of Stephenie Meyers' romantic fantasy saga has also been split into two films, with the much-anticipated first part of the saga now hitting cinemas. And now Team Edward followers will finally get to see what they've been waiting for so long: Bella and Edward's wedding and, of course, their passionate wedding night.

After the events of Eclipse, the future is finally looking a little brighter for Bella (Kristen Stewart) and Edward (Robert Pattinson). After a true dream wedding, they're honeymooning on a romantic island near Rio. And even if the first time has left clear marks on Bella, the passion for more grows in the newly minted Mrs. Cullen. Edward, on the other hand, is reserved, not wanting to hurt his young bride. The two realize that it is already too late for that when Bella discovers that she is pregnant. But it is not a normal pregnancy. The baby grows in her belly with incredible speed and robs the expectant mother of any vitality. While Edward must fear for Bella's life, the offspring also poses a real threat to Jacob's (Taylor Lautner) clan. Therefore, it is decided to kill Bella and the child, which Jacob, of course, can not allow. And so, in the face of a life-threatening birth, a relentless battle between vampires and werewolves also ensues, with Jacob having to go against his own family and side with his greatest rival.

Although I'm certainly not part of the target audience for the Twilight films, and it's easy to trash the film adaptations of the popular book series, I've so far avoided speaking too negatively about the stories surrounding Bella, Edward and Jacob. After all, the first three films were almost perfectly tailored to their target audience and have also shown a steady increase in quality. But with Breaking Dawn - Bite to the End of the Night Part 1, I find it hard to find many positive words. So I'd like to start with the positives.

No question: craft-wise, the film is more than solid. The camera work is excellent, the set design is convincing, and the story itself is attractively staged. The wedding is so romantically staged that it's sure to tug at the heartstrings of distinguished female fans. Besides all the moments of unrestrained pining, especially the speech of Bella's father provides some cheerful moments, which is why this very long sequence is one of the most successful scenes of the film.

But what really hurts the film is the obviously purely commercial decision to split the last book into two films. Because the story could have been handled in one slightly longer movie without any problems. As it is, however, the action is incredibly drawn out and by the end you get the feeling that not much has actually happened. At least not enough for a cinematic event of this scale. In addition, the scenes that left a lasting impression in the novel - the first sex between Edward and Bella and the birth of Renesmee - are heavily downplayed. On the one hand, this is understandable, as the film probably wouldn't have received a release appropriate for its target audience otherwise. On the other hand, it also takes away the certain spice that would have really done this fourth installment good.

When it was announced that director Bill Condon (Gods and Monsters, Kinsey, Chicago) would direct the last two Twilight films, a significant rise in quality was actually to be expected. Whether Melissa Rosenberg's rather weak script or simply the compulsion to spread the story over two films is responsible for the fact that these expectations could not be fulfilled, remains to be seen. The fact is that Breaking Dawn - Bite to the End of the Night Part 1 comes across as terribly boring and also rather listlessly acted for large parts. Sure, the chemistry between the main actors is right and some fans are satisfied with the fact that Jacob finds a reason to take off his shirt in the first seconds of the movie to overlook some weaknesses. But that the final volume really needs a two-parter, no one can actually claim with convincing arguments after this work.

If just the third film also had to offer some moments that could please non-fans of the books, Breaking Dawn - Bite to the End of the Night Part 1 is a pure fan film. The young female fans will also like this part, no matter what the critics say. But in a few years, when they look back on the series full of nostalgia, even the biggest fans will probably have to admit that this is the weakest film in the saga (so far). Let's hope that part 2 offers a more dignified farewell