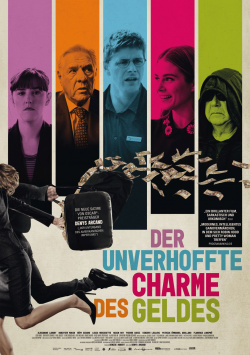 The Unexpected Charm of Money

The shy courier driver Pierre-Paul (Alexandre Landry) decides mainly with his head. This gets in the way of his personal happiness more than once. But one day, that very thing could bring him unexpected wealth. For the die-hard opponent of capitalism witnesses a major robbery and accidentally comes into possession of the loot worth millions. But where to put all the money. While police and gangsters alike search for the money, Pierre-Paul tries to get the millions to safety with the help of financial genius Sylvain (R&eacute;my Girard), who has just been released from prison. Also on board is luxury call girl Aspasie aka Camille (Maripier Morin), with whom Pierre-Paul falls head over heels in love. But that's exactly what puts the police on his trail.

Oscar winner Deny Arcand (The Invasion of the Barbarians) once again presents a very multilayered work with The Unexpected Charm of Money, which skillfully combines biting social criticism with wry humor. The partly very cleverly constructed story is carried by very interesting characters whose development is a pleasure to watch. Especially that of Pierre-Paul, who can formulate his views - especially in relation to capitalism - very pompously. But in the face of bags of money or the beautiful Camille, his convictions collapse like a house of cards.

He simply can't resist these temptations and could make glaring mistakes as a result - if it weren't for people who are as good at transferring money to secure off-shore accounts, which is not exactly legal, as Pierre-Paul is at theorizing his critique of capitalism. If the courier driver's nervousness during his first encounter with the call girl makes for very amusing moments through very direct humor, Arcand reveals during a later scene how masterfully he can also handle satire. When he reveals how easily - as long as it is done with the necessary unscrupulous audacity - millions can be made safe, you just can't help but grin sardonically.

With a running time of over two hours, The Unexpected Charm of Money is a wee bit too long. It also lacks the emotionality that had distinguished The Barbarian Invasion. Nevertheless, Arcand's new film is also great entertainment cinema, in which the intellect is not neglected. A cleverly constructed rogue comedy that looks at the dark side of the financial world with humour, but also with dramatic depth. Absolutely worth seeing!

Cinema trailer for the movie "The Unexpected Charm of Money (Kanada 2018)"
Loading the player ...