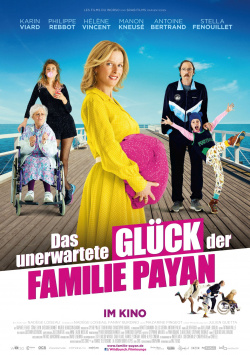 The unexpected happiness of the Payan family

It's bad enough that Nicole (Karin Viard) is constantly brought to the brink of a nervous breakdown by her family. Her unemployed husband Jean-Pierre (Philippe Rebbot) isn't exactly a paragon of reliability, her grown daughter Arielle (Manon Kneus&eacute;) still acts like she's a teenager and likes to pass the responsibility for her daughter Zoe (Stella Fenouillet) onto Nicole. And their mother (H&eacute;l&egrave;ne Vincent) also needs more and more care, which mostly falls on Nicole as well. And now her body is acting up, too. Probably menopause - actually quite normal at 49. But then the doctor tells her some completely unexpected news: Nicole is pregnant! But is there room for another family member in her already chaotic life? Nicole not only has to digest this news, but also make a difficult decision - a decision that everyone is suddenly trying to talk her into.

With her feature debut, The Unexpected Happiness of the Payan Family, director and screenwriter Nad&egrave;ge Loiseau has staged a strange conglomeration of over-the-top romp, social drama and light family comedy. The idea, which she realized as a short film back in 2012, is really nice and full of good ideas. It is also to her credit that she tried to wrestle some serious sides from her comedy, in which she asks really relevant questions. What she hasn't managed to do, however, is find a coherent tone that ties the various plot elements and mood colors together.

So at times the whole thing is loud, shrill and extremely exhausting, then suddenly quiet and thoughtful again, only to resort to very over-the-top humor a short time later. The problem with this is that there are hardly any truly likable characters to make up for this shortcoming. Jean-Pierre, while kind of likable, is so screwed up and listless that it's hard to really like him. Daughter Arielle is just immature and selfish and a complete failure as a mother. Even Nicole's mother is nowhere near as likable as she could possibly be. As with the story, the film itself hinges everything on Nicole, played with aplomb by Karin Viard. But even she fails to play against the obvious weaknesses of the production and script.

There are moments when the film works quite well. That's when it manages to not only provide solid entertainment, but also amuse its audience in a very enjoyable way. But such moments are unfortunately far too rare in the just over 100 minute running time. Most of the time you're just annoyed by the characters and their actions and are just irritated by the indecisive drifting back and forth between comedy and drama. And that's why The Unexpected Happiness of the Payan Family really can't be considered a stroke of luck for cinema. Only conditionally worth seeing!

Cinema trailer for the movie "The unexpected happiness of the Payan family (Frankreich 2016)"
Loading the player ...