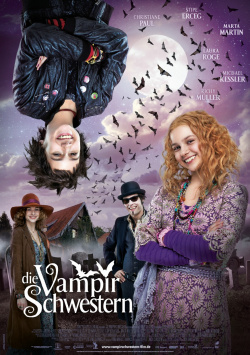 As if moving from Transylvania to a small town in Germany wasn't bad enough for Silvania (Marta Martin) and Dakaria (Laura Roge), they had to leave all their friends behind in their old home. Now the sisters are supposed to act like normal girls as well. And that's not so easy for them, since they are half-vampires who are more human than their vampire dad (Stipe Erceg). But their hypersensitivity to the sun and garlic, their ability to fly and their very special eating habits make it difficult for the vampire sisters to fit into their new environment. Dakaria, in particular, is uncomfortable in Germany. She would rather go back to Transylvania, where she can be a vampire to her heart's content and doesn't have to hide. Silvania, on the other hand, is really excited about her new life - so excited that she would like to be a full human. And since Dakaria couldn't imagine anything better than being a complete vampire, the girls embark on a dangerous game with magic - with unexpected consequences.

The Vampire Sisters is based on the children's book series of the same name by Franziska Gehm. Director Wolfgang Groos (Vorstadtkrokodile 3) has staged a fantasy adventure suitable for the target audience, in which he has tried to mix humour, real problems of children in their early teens and a little bit of fantastic elements into an entertaining whole. The story does indeed have a few nicely intended allusions to the classic vampire myth (for example, the surname of the vampire sisters Tepes is borrowed from the bloodthirsty Vlad Tepes, who is historically regarded as the real Dracula) and to famous vampire movies. And for sure, young viewers will also be amused by the girls' patter, Michael Kessler, who is unfortunately condemned to completely over-the-top silliness, and the unfortunately unavoidable fart and diarrhea jokes.

However, even if this will make the film a lot of fun for the target audience and especially the young leading actresses also act really convincingly, The Vampire Sisters is far from being a good children's film. Apart from the fact that many of the gags are just too predictable and the overacting of the adult actors tries to beat the joke into you with a sledgehammer, the movie lacks any kind of originality and charm. The whole thing rather looks like a blithely stolen commercial product that uses its nice basic idea too superficially. The Kleine Vampir books by Angela Sommer-Bodenburg and the TV series based on them from 1986 have proven that the vampire theme can be treated not only excitingly but also humorously and entertainingly for children, without having to be strained to be cool and resorting to fecal humor that is always good for a laugh but completely unimaginative. And it may well be that the makers of The Vampire Sisters wanted to be similarly affectionate about the mythos and the clichés associated with it. But unfortunately there is hardly anything of that in the finished film.

For true vampire fans, young or old, The Vampire Sisters should be at least as annoying as the Twilight saga, since here as there the entire myth is not only trivialized and watered down, but downright dragged into ridicule. That in itself wouldn't be so bad if the whole thing was done in an original and funny way. But that is unfortunately not the case here. For kids, who just don't know any better and who will surely find flipping really cool, the movie is still worth seeing, because the little ones are entertained in a very simple way. But purely qualitatively considered, a good children's film simply looks different!

Cinema trailer for the movie "The Vampire Sisters (Deutschland 2012)"
Loading the player ...