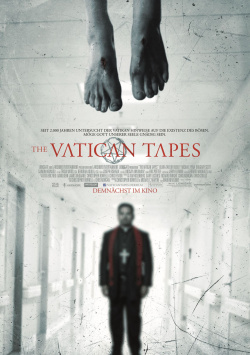 Angela Holmes (Olivia Taylor Dudley) is a perfectly normal young woman: she's pretty, cheerful, and happily involved. All is going well in Angela's life - until, after a seemingly innocuous injury, she begins to exhibit increasingly strange behavior. As mysterious occurrences pile up around her, with people getting hurt or even dying, the young priest Father Lozano (Michael Peña) becomes convinced that Angela is possessed by a demon. In desperation, Lozano turns to the Vatican to request an exorcism. This request calls Vicar Imani (Djimon Hounsou) and Cardinal Bruun (Peter Andersson) to the scene. They really only expect to be able to debunk that the alleged possession is humbug. But then Bruun is confronted with a satanic force that quickly pushes even an experienced exorcist like him to his limits. Can Angela still be saved?

As co-director of the two Crank films, Mark Neveldine has delivered fun cinema at its finest. And even his over-the-top version of Ghost Rider had at least a pleasantly high entertainment potential besides quite a few weaknesses. Therefore, Neveldine's excursion into the realms of exorcism horror could be expected to be an entertaining, inappropriate contribution to the genre. But unfortunately, The Vatican Tapes didn't turn out to be exactly that. The production is so predictable, unimaginative and restrained that you'll be fighting sleep after just a few minutes. The fact that the whole thing is presented as a mix of classic feature film and found-footage muck doesn't make the impression any more positive.

The film's real problem isn't its lack of originality. Since The Exorcist, nearly every genre film dealing with exorcising demons has followed a very similar pattern. That's not a bad thing, either, if the tension is right. Neveldine is obviously trying to build up a gripping atmosphere, but whenever something like suspense comes up, the camera fades out or overly striking effects are used, which really don't scare anyone anymore. The few successful goosebump moments are not enough to make up for this overly obvious shortcoming.

Olivia Taylor Dudley, who has already played quite successfully against a weak script in the Chernobyl Diaries, is by far the best and most watchable aspect of the film. Dudley is visibly trying hard to believably and intensely embody the transformation of the good girl next door into a possessed demon bride. However, even though she manages to do so quite decently, it only marginally helps the film. All the other actors deliver no more than solid performances, but are crushed by the overly conventional and despondent production.

If you expect nothing more from The Vatican Tapes than standard off-the-shelf exorcist merchandise, you might actually be quite entertained by the mystery-horror thriller. But if you're hoping for real goosebumps, gripping suspense and a surprising story, you'll leave the cinema bitterly disappointed. This is unfortunately only enough for a: worth seeing conditionally!

Cinema trailer for the movie "The Vatican Tapes (USA 2015)"
Loading the player ...