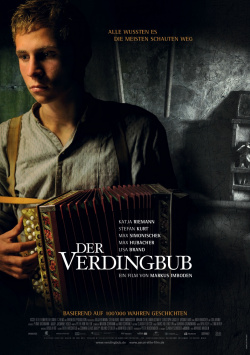 One of the darkest chapters in Switzerland's recent history is now being addressed in the cinema: the fate of the Verding children. Between 1800 and 1950 - and in some communes even beyond - many hundreds of thousands of orphans, divorced and illegitimate children were handed over by the authorities to peasants as labourers held like slaves. The peasants were paid a small boarding fee in return. No emotional closeness or respect was shown to the children. Violence, humiliation, hard labour and rape were the order of the day. The Verding children could not expect help or protection, since poverty was considered self-inflicted and genetically determined until well into the 20th century. Most cases of mistreatment were never prosecuted and have been hushed up to the present day.

Markus Imboden now wants to break this silence with his film Der Verdingbub. It tells the story of twelve-year-old Max (Max Hubacher), who hopes to finally have something like a real family when he is brought to the Bösinger family farm by the priest (Andreas Matti). But neither the perpetually drunken farmer (Stefan Kurt), nor his bossy wife (Katja Riemann) give the orphan boy any form of human warmth. Instead, they keep him like a workhorse. While he is able to gain the farmer's respect in the field, he draws the ire of his biological son Jakob (Max Simonischek) in doing so. Only his teacher (Miriam Stein) manages to bring a little joy into the boy's bleak life by encouraging him to pursue his passion, playing hand organ. When 15-year-old Berteli (Lisa Brand) is hired out to the Bösingers, a friendship develops between Max and the girl after initial disagreements, allowing them both to dream of a better future. But like so many dreams, hers threatens to be shattered by brutal reality...

Der Verdingbub is a very difficult film. On the one hand, there is the subject matter, which is just harrowing and makes you extremely angry again and again. But on the other hand, there is also the very dark, dreary production, which pulls the viewer into the story in a very intense way and makes you vividly feel the fate of Max and Berteli. And that is truly not a pleasure. The images captured against the impressive natural backdrop of the Emmental seem just as oppressive as the acting, especially by Stefan Kurt, Katja Riemann and Max Simonischek. One feels extremely uncomfortable and gratefully absorbs every spark of brightness and hope.

These appear primarily when Miriam Stein appears as a dedicated teacher and manages to put a smile on Max's face by encouraging him to play hand-gels. Therein lies Max's great passion, his way of escaping the darkness around him. Even though the instrument has the quality of quickly getting on the listener's nerves, the scenes in which Max plays his hand organ are of an importance and intensity that are essential to the film and its impact.

You have to get used to the depressing mood, the dubbing into High German, which takes some getting used to because it is very obvious, especially at the beginning, and to the production, which is sometimes a bit difficult to access, in order not to be crushed by the heaviness of the film in terms of content and atmosphere. If you don't succeed in doing so, you won't be captivated or even bored by the mostly very slow and slow narration. But if you can open yourself up to it, you will experience a very intense movie, whose story will stay in your mind for a long time. Therefore also for friends of the somewhat heavier, challenging arthouse fare: Worth seeing!

Cinema trailer for the movie "The Bloody Boy (Schweiz/Deutschland 2011)"
Loading the player ...