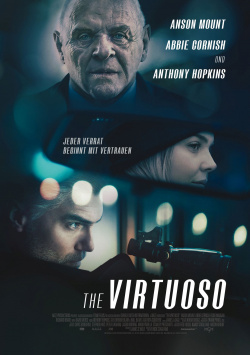 A nameless professional killer (Anson Mount) is one of the masters of his trade - until a job goes horribly wrong for him. His mysterious client (Anthony Hopkins) sees only one chance how the killer can still save his reputation: He must take on a particularly tricky job. The problem: who the target is, the virtuoso doesn't know. He is only given a place, a time and a code word. Too bad that at the given time several people - including a charming waitress (Abbie Cornish) or a small-town sheriff (David Morse) - are present. Now he must use all his skills to get this job done without blowing his own cover...

"The Virtuoso" is based on a premise that isn't really logical. For all sense goes out the window because of what the virtuoso reveals to his audience from the very beginning as a constant narrator: To become the kind of professional he is, one must abide by certain rules. Precise planning and precision are undoubtedly among them. Not only does he fail to do all of that two minutes later, thus blowing a job - he then takes a job where he can neither plan, nor remain inconspicuous, nor display precision. He really doesn't live up to the name of the film in this regard.

You have to hand it to director Nick Stagliano for creating quite an engaging atmosphere visually. And also the cast is quite top-class with Anthony Hopkins, David Morse or Eddie Marsan especially in the supporting roles. The problem, rather, is the script. The premise - an assassin is hired to kill someone, but doesn't find out who it is - is, as I said, relatively pointless and the dialogue - or rather the narrator's monologue - is horribly written. Even the big reveal at the finale can't pull much out of that. At least this one is consistently delivered, which reconciles a tiny bit.

"The Virtuoso" is a thriller that thinks it's cleverer than it actually is. The film isn't really bad at that, but unfortunately it isn't really good either. A few atmospheric images and an endeavoring ensemble ensure that it hasn't become a total failure in the end, despite the many criticisms and the largely non-existent suspense. A "Sehenswert" there is nevertheless only with clear restrictions!

Cinema trailer for the movie "The Virtuoso (USA 2021)"
Loading the player ...