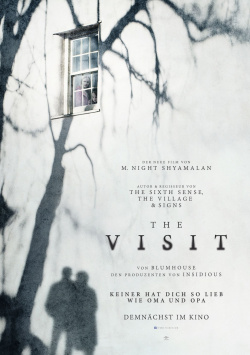 Actually, Becca (Olivia DeJonge) and her little brother Tyler (Ed Oxenbould) are looking forward to finally meeting their grandparents Nana (Deanna Dunagan) and Pop Pop (Peter McRobbie). Until now, her mother (Kathryn Hahn) has barely spoken about the two of them and hasn't been in contact with her parents in many years. But now the single mom has finally earned a vacation with her new flame - the perfect opportunity to send the kids to live with their grandparents in the country. This comes in handy for Becca, as she wants to capture this family reunion and journey into her mother's past on camera, working on her great passion of filmmaking. And it all begins just as she imagined: her grandparents are two lovely old people who live in an idyllic cottage. The fact that her brother is annoying as always and that there is no TV and no mobile phone reception can be forgotten. But then Nana and Pop Pop start to behave more and more strangely and the holiday in the country turns into a real nightmare...

The Visit can rightly be called the comeback of M. Night Shyamalan. While this found-footage mystery-grisper doesn't come close to The sixth Sense or Unbreakable, it's directed with considerably more love and passion than the soulless flops After Earth and The Legend of Aang. After those artistic and commercial flops, Shyamalan completely broke away from the machinery of big studios for his new film and completely self-financed the $5 million flick. And this is clearly noticeable in the film - both in positive and negative respects.

The Visit breaks no new ground. The beginning in particular is a single found-footage cliché with numerous scenes full of (supposed) trivia. But there are two aspects of the mise-en-scène that make the film stand out a tiny bit from other representatives of the genre. Firstly, there is the fact that Shyamalan directed the whole thing with a slight wink. Again and again there are some very humorous scenes, which offer an effective contrast to the successful creepy elements. It's clear that you shouldn't take this work too seriously, which already makes The Visit pleasantly different from the overdone seriousness of earlier Shyamalan films. The second aspect is again typical for the filmmaker: The Visit again has one of the famous twists to offer. This one, in retrospect, is clearly set up early on. Yet, you just don't see it coming. This twist is great and has an extremely positive effect on the overall impression of the film.

If this is to remain consistently positive, you should leave the cinema about three minutes before the credits. There is a scene that is the perfect ending. But for some inexplicable reason, Shyamalan has decided to tack on another epilogue that is just cruelly cheesy and completely unnecessary. The joy of what is once again a very successful surprise that the filmmaker has offered his audience is almost completely lost in these minutes. Still, The Visit very pleasantly recalls in many moments why M. Night Shyamalan was once considered Hollywood's new wunderkind before he became the punchline to one bad joke that his last few films have been. He's already made up a lot of ground with the TV series Wayward Pines, which he produced and also directed the pilot for. He can definitely confirm this impression with The Visit, despite the worn out found footage style and the cruelly bad epilogue.

So if you like scary movies of the very harmless kind, love found footage movies and admired early M. Night Shyamalan for his surprising twists, you should definitely go to the country with Becca and Tyler to visit their grandparents. It's worth it! Worth Seeing