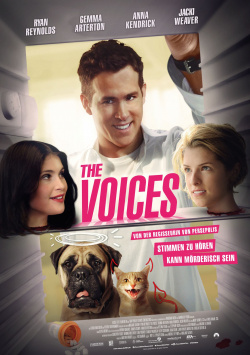 Factory worker Jerry (Ryan Reynolds) is a seemingly quiet, somewhat shy young man who can't seem to hurt a fly. He is always friendly and helpful and lives for his work and his pets. What those around him don't know is that Jerry actually has to take heavy psychiatric drugs to keep his schizophrenia under control. But Jerry doesn't want to do that at all. Although he promises his therapist, Dr. Warren (Jacki Weaver), that he will take his pills, he has long since stopped taking them. Because if he doesn't take the medication, then he can talk to his adorable dog Bosco and his somewhat spoiled chatting cat Mr. Whiskers. And Jerry just won't let that get away from him. So far he has managed to cope well with the situation and suppress all the negative effects of his illness. But when he falls in love with the attractive accountant Fiona (Gemma Arterton), the voices in his head finally start to go crazy and his carefully guarded life threatens to go completely off the rails...

With The Voices, director Marjane Satrapi has delivered a film that differs in almost every respect from her previous works Persepolis and Chicken with Plums. Shot largely in Germany, this horror-comedy relies less on artistically playful production and more on quirky and offbeat humor, which is supplanted in the second half by the increasingly dark underlying tone of the story. The whole thing starts off extremely promising: the look of the film is slightly over-stylized, creating a very special, very unusual atmosphere. There are some very funny moments, even if Mr. Whiskers' patter comes across as a little too forcedly crude at times. And Ryan Reynolds does a really good job as the love-struck oddball, while his beloved Gemma Arterton perfectly embodies the object of his desire.

Packaging the theme of schizophrenia in such a way that it fits into a gory horror comedy, Satrapi does a great job in the scenes where the discrepancy between what Jerry perceives and what reality looks like is shown. It's these moments that make it clear that The Voices is precisely not a silly romp, but actually tells a very sad story about a highly disturbed human being. The contrast this creates is very intense, but might not work for some viewers for that very reason. For while the gags - whether the raunchy dialogue of the politically incorrect talking cat or the conversations with severed heads - are kept rather light and simple, the layer of story hidden beneath them crushes with an enormous heaviness.

No question, The Voices is a very unusual, original and, for long stretches at least, entertaining film for genre fans. Unadjusted, macabre and really well acted, this quirky work definitely sticks in the mind for a long time. But in the end the feeling remains that Marjane Satrapi didn't get everything out of the basic idea and especially at the end she put on the brakes too much. Although there are already some nasty gags, the humor should have been even more irreverent (but not raunchy), biting and uncompromising, so that the story really works. Nevertheless: if you like it a bit bizarre and macabre, if you don't expect too much because of the original idea and if you like Ryan Reynolds in general, you should take this trip - if possible in the original English version, in which Reynolds also lent his voice to Bosco and Mr. Whiskers. Worth seeing

Cinema trailer for the movie "The Voices (USA/Deutschland 2014)"
Loading the player ...