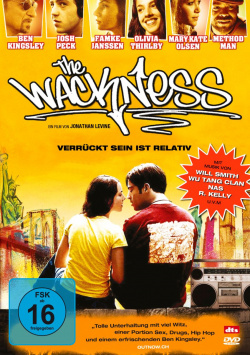 The Wackness - Love is a Drug - DVD

Film: Luke Shapiro (Josh Peck) doesn't just look back on his just finished high school time with much melancholy. But even in the future the outsider does not look really positive. His constantly arguing parents, the financial situation of his family and the uncertainty as to what his professional career should look like cloud the boy's thoughts. The occasional dealer finds help from the psychiatrist Dr. Jeffrey Squires (Ben Kingsley), whose sessions he pays for with the finest marijuana. An unusual friendship develops between the two, which helps Luke to take important steps on the way to adulthood. When he falls in love with Stephanie (Olivia Thirlby), the stepdaughter of his smoking mentor, luck finally seems to have arrived in Luke's life. But unfortunately the opposite is exactly the case...

With "The Wackness - Liebe ist eine Droge" director Jonathan Levine ("All the boys love Mandy Lane") has delivered a festival darling who tells with clever humor and quiet drama about growing up in the early 90s. This applies not only to the main character Josh, but also to Jeffrey, who, trapped in a bleak marriage and plagued by depression, has to hide behind a completely unadulterated behavior and learn that you are never too old to be able to change.

What is particularly positive about the film is that it cleverly avoids drifting into common clichés of teen comedies. Even though parties are celebrated, drugs are consumed and first experiences with sex are made, but the whole thing takes place on a relatively authentic level - apart from some small exaggerated aspects. Especially the relationship between Luke and Stephanie reflects this very well. If Levine had made use of a bit more raunchy humor here or if the actors Josh Peck and Olivia Thirlby were less convincing, the whole thing wouldn't work out so well. But since these aspects are right, the short vacation of Luke and Stephanie and its consequences is one of the most beautiful and credible moments of the movie.

Actingly a once again great Ben Kingsley is at the top. The mixture of exuberant humour and sensitive drama brings the Oscar winner to the point and makes every scene in which he appears as a very unconventional psychiatrist a real pleasure. "The Wackness - Liebe ist eine Droge" is a completely relaxed indie-pearl, which gives the audience a lot of warmth and a cheerful smile and offers good entertainment almost every minute. Although there are some light hangers in the middle section, they are only slightly negative in the overall picture. Therefore, the bottom line is that anyone who likes American independent cinema and appreciates authentic coming-of-age films will get their money's worth in "The Wackness - Love is a Drug". Absolutely recommendable!

Picture + Sound: Warm colors and a good degree of sharpness are on the plus side of the picture, while a slight drizzle is a little disturbing here and there, especially in the darker moments and weaknesses in the presentation of details. The sound is dominated by the well tuned dialogues and the great 90s soundtrack. Good.

Extras: A nice bonus package was put together for the DVD evaluation. Besides an unfortunately not subtitled audio commentary by Jonathan Levine and his lead actor Josh Peck, there is also a quite nice Making of (about 17 min.), as well as a short documentary, which accompanies director Jonathan Levine for one day during the promo tour of the movie (about 7 min.). In addition there are edited scenes and a very nice amateur TV show with old trims by main character Luke Shapiro (ca. 7 min.). Good.

Fazit: "The Wackness" is an amusing and original portrait of growing up in the 90s. With great actors, clever dialogues and especially in the last third almost surprising warmth, this drama is completely convincing. With its adequate technical implementation and the good extras, there are further good reasons to include this DVD or Blu-Ray in the home cinema collection. absolutely recommended!