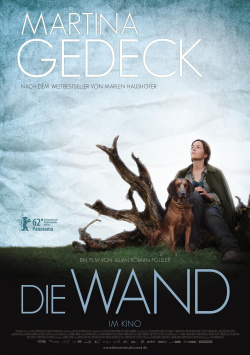 There are always novels that are considered unfilmable. The Wall by Marlen Haushofer is one such work. Hailed by many as one of the most important and best German-language books of the last fifty years, the extraordinary story provides a wide range of interpretation that is difficult to translate to the screen. However, filmmaker Julian Roman Pölsler, himself a great admirer of the novel for many years, has now ventured into the difficult endeavor and, with Martina Gedeck in the lead role, has delivered a worthy adaptation of Haushofer's acclaimed work.

The story, in summary, reads rather simply despite its interesting premise: a woman (Gedeck) goes with a couple of friends for a weekend getaway to a mountain hut in Austria. When the couple fails to return after a trip to the village, the woman sets out to find her friends. In the middle of her journey to the village, she bumps into an invisible wall that seems to cut her off completely from the outside world. What at first feels like a dream or a delusion soon becomes a terrifying reality for the woman. She is trapped in her little microcosm, where from now on she is completely on her own. In the hut she begins to write down her experiences, her innermost thoughts and fears...

The Wall is an oppressive, somewhat unwieldy, yet thoroughly fascinating drama. The film had to be shot in several blocks over the course of a year, which meant that the crew had to be replaced time and again. The fact that Pölsler had to work with several cameramen turns out to be a great advantage, because the action always gets a different, very special look in the different seasons. The images are also what make this adaptation of the novel so fascinating. The picturesque mountain landscape is captured in a way that seems very authentic on the one hand, but at the same time also strange and somehow unreal. It is simply great how Pölsler creates a tension only through images and small sound effects that carries the entire film, although not really much spectacular happens.

Whoever can be captivated by the mood of the film, will definitely be thrilled by Die Wand. The intense acting of Martina Gedeck, who truly seems to become one with the nature that defines her microcosm, is truly impressive. The thoughts she writes down provide a quietly but intensely delivered commentary on the film's oppressively beautiful imagery. In doing so, Pölsler has kept very closely to the original, merely shortening some passages and replacing only a single word. This is as brave as it is consistent, and ultimately results in Die Wand being absolutely convincing as a literary adaptation.

Certainly, it is not a film for the masses. The access to the screen version is similarly difficult as that to the book, which is also not everyone. Who can get involved in the quiet staging, the voice of Martina Gedeck and the intense images, but is offered a particularly intense cinematic experience - and then of course applies: worth seeing!

Cinema trailer for the movie "The Wall (Österreich/Deutschland 2012)"
Loading the player ...