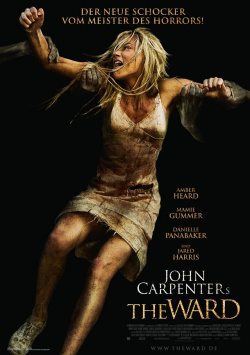 With movies like Halloween or The Fog and The Thing John Carpenter wrote horror film history. The influence his works had on the genre, especially in the late 70s and early 80s, can still be felt today. So we were happy when nine years after his last movie a new Carpenter was finally announced with The Ward - Die Station. But even though the film is a solid shocker, the veteran director is far from the form of earlier days here.

The story centers on young Kristen (Amber Heard), who is admitted to a mental hospital in 1960s Oregon after setting fire to a farmhouse. Why she did this is something the girl can't remember, nor can she remember the origin of the many injuries her body has. Attending psychiatrist Dr. Singer (Jared Harris) tries to help Kristen remember everything. Like the four other young patients in the ward, she is to be freed from her mental disorders with new medication and radical treatment methods. But after a short time Kristen realizes that her psyche is not the real danger. For the ward is haunted by a vengeful spirit, to which apparently already patients have fallen victim. But of course, no one wants to believe Kristen that all their lives are in danger.

In some shots, Carpenter's signature is very evident. In those moments, The Ward - The Station could very well be one of the cult director's early works. The Ward is also a very atmospheric place that offers potential for good creepiness. Here and there Carpenter manages to establish this and create a pleasant goosebumps in the viewer. But unfortunately, otherwise rather averageness and lack of originality prevails, which should lead especially for connoisseurs of the genre to the fact that the entertainment value of the horror flick is significantly diminished.

The actors try their best to play against the rather lukewarm script. Amber Heard, who has become the token blonde of the current horror movie crop after films like All the Boys love Mandy Lane, And soon the Darkness, and Stepfather, once again screams her way through the action respectably. And also Danielle Panabaker (Mr. Brooks, Friday the 13th), Meryl Streeps daughter Mamie Gummer (Taking Woodstock) or Lyndsy Fonesca (Kick-Ass) deliver solid performances, although their characters are absolutely overdrawn and clichéd.

The ending, which is supposed to be quite a surprise, is admittedly not really a new idea either. Anyone who has dealt with disturbed personalities in film a time or two will have come across the resolution of the story of The Ward - The Station many times before. Unfortunately, the big aha-effect is missing here as well. Thus, the latest work of veteran John Carpenter can convince in some respects and entertain quite well. But a really good horror movie didn't come out in the end - and that's all the more disappointing with an expert like Carpenter - despite the one or other cucumber he already has to show in his résumé. Therefore: for fans of Amber Heard and lovers of rather simply knitted scary movies definitely worth seeing. Fans of real horror and the classic Carpenter films, on the other hand, will be rather disappointed!