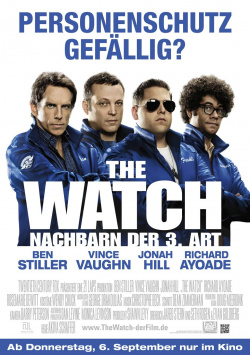 The Watch - Neighbors of the 3rd Kind

The idea actually sounds genius: take a group of hotshot comedy stars like Ben Stiller, Vince Vaughn, and Jonah Hill and have them battle an alien invasion in a normal American small town, directed by an accomplished gag writer from the legendary comedy series Saturday Night Live. When the whole thing has been put to paper by Superbad writers Seth Rogen and Evan Goldberg, it can only result in a real gag firework - right?

The Watch - Neighbours of the 3rd Kind definitely has great potential. The comedy tells the story of dedicated Evan (Ben Stiller) who, after a colleague is gruesomely murdered in the supermarket branch he manages, starts a private vigilante group. However, his call is joined by only a few like-minded individuals: notoriously good-humored Bob (Vince Vaughn), young Franklin (Jonah Hill), who seems to have some issues with his aggressiveness, and newly divorced Jamarcus (Richard Ayoade, The IT Crowd). Yet somehow his new vigilante pals don't seem to take the whole thing as seriously as Evan does. Instead of listening to his rules and plans, they'd rather enjoy the perks of Bob's party basement. But the fun comes to an end when they find out that an alien has killed Evan's fellow vigilantes, and that several more aliens are waiting in their small town to launch a deadly invasion against humanity. And so now it's up to the only partially capable squad to save their town, their country, and their planet.

In the US, The Watch - Neighbors of the 3rd Kind fell far short of expectations at the box office and also took a nasty beating from critics in the first place. However, the film is far from being as bad as one might think. The raunchy alien hunt has some really good laughs to offer and can convince especially in the moments in which the humor is a little bloodier or small satirical side blows to the American way of life are handed out. In these moments, however, it also becomes clear what great potential the creators have squandered here in favor of countless penis jokes.

The pubescent bodily fluids humor, which is used here to total exhaustion, provides for the one or other good laugh. But in the long run these jokes, which are mainly limited to male sexual organs and their secretions, wear themselves out and only provide for a tired smile or rolled eyes of the audience. When the hunt for the aliens finally gets going for real, it's amusing and staged worth watching. But the way there is arguably bumpy and a bit too raunchy to leave an all-around positive impression.

So in the end, The Watch - Neighbors of the 3rd Kind is a very good idea that works quite neatly after completely shutting down your brain and turning off your good taste. But it's kind of sad that the fun premise and comedic potential of the story and cast has been given away in so many scenes, just to accommodate as many genital jokes as possible. The Watch isn't a complete crash landing, but somehow Neighbors of the 3rd Kind, for all its goodwill, is nothing more than a movie of the moronic kind. But then again, that can be really fun sometimes. For fans of Ben Stiller and / or Vince Vaughn and / or Jonah Hill, who like it a bit more raunchy, definitely still worth seeing!