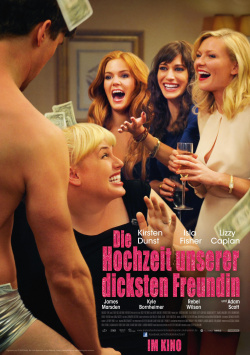 The Wedding of Our Fattest Friend

Regan (Kirsten Dunst), a perfectionist of the worst kind, is downright shocked when she learns that her old school friend Becky, of all people, who used to be called a pig's cheek because of her weight, is going to walk down the aisle in front of her. Together with the girls from her old clique, the sarcastic Gena (Lizzy Caplan) and the hyper Katie (Isla Fisher), Regan is supposed to make sure everything runs smoothly at the festivities as a bridesmaid. But the bachelorette party ends in pure chaos: the wedding dress is torn, Katie is high on booze and drugs, and Gena clashes with her ex (Adam Scott). Whether Regan can still save the wedding with her perfectionism seems more than questionable...

Our Fattest Friend's Wedding is based on the off-Broadway play Bachelorette, which author Leslye Headland adapted for the screen herself. The play was originally intended as a drama, but when the audience at the premiere reacted to the bridesmaids' experiences with hearty laughter, Headland realized the comedic potential of her story, which she subsequently fleshed out more fully. The film version of her play, which marks her feature directorial debut, ultimately became a straight comedy, with its more serious set pieces sadly completely gone.

The cast of the chaotic wedding preparation is quite respectable. Kirsten Dunst is an inherently charming (though there's little of that in this rather unsympathetically created role) and, above all, talented actress. The chemistry between Lizzy Caplan and Adam Scott, who already harmonized well in the unfortunately short-lived series Party Down, is spot on. James Marsden once again shows his humorous side, which he clearly enjoys. And Isla Fisher (Shopaholic) also exudes a certain naive charm as the loopy Katie.

However, none of this helps to make The Wedding of Our Fattest Friend a good film. It's precisely in the comparison that just about suggests itself to Bride Alarm, in which Rebel Wilson also had a small role, that it becomes clear how unfunny Headland's all-too-effortful directorial debut is. Granted, there are some decent laughs, thanks primarily to reality-based absurdities. The problem, however, is that any semblance of cleverness sinks into flat silliness, and the very first-person characters rarely succeed in winning the audience's sympathy. While it's clear what Headland wants to show: a group of failed existences clinging convulsively to their high school popularity. An interesting starting point in itself, with plenty of dramatic and comedic potential. But unfortunately the characters are drawn with so little charm that any spark of this potential quickly burns out and the goings-on accompanied by shrill shrieks are simply no longer funny but just annoying.

It's a shame that so much obvious talent and a starting situation that is promising in itself are given away in such a way. Certainly, in the genre of over-the-top wedding comedies, no particularly high intellectual quality, no outstanding originality or great acting should be expected as a matter of principle. But there should be at least a touch of entertainment value, comedy and charm - and that has The Wedding of our fattest friend unfortunately only so marginal to offer that a recommendation here can not be pronounced with the best will in the world. Too bad!

Cinema trailer for the movie "The Wedding of Our Fattest Friend (USA 2012)"
Loading the player ...