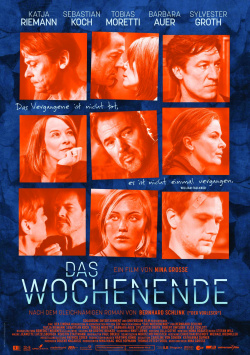 Actually, Inga (Katja Riemann) wanted to go on a relaxing holiday to Rügen with her husband Ulrich (Tobias Moretti). But a call from her friend Tina (Barbara Auer) throws those plans out of whack. Tina invites them to visit her country house. Actually a nice idea, were it not for the rather unpleasant occasion. Because Inga's childhood sweetheart, former RAF member Jens (Sebastian Koch) has been surprisingly released from prison after 18 years. And Tina wants him to be welcomed by old friends as he starts a new life. Henner (Sylvester Groth), who used to be part of the inner circle around Jens, Inga and Tina, has also already agreed. Inga is reluctant at first, as she never really wants to see Jens again. But Ulrich finally persuades her to accept the invitation. But within minutes of Jens' arrival, it becomes clear that the reunion will not be a start to a new future, but an uncomfortable journey into the past. Especially since Jens finally wants to find out who betrayed him back then. When Gregor (Robert Gwisdek), Inga and Jens' son, shows up unexpectedly, the tense situation threatens to escalate for good.

The Weekend is based on motifs from Bernhard Schlink's novel of the same name, but deviates so clearly from the original in some points that Nina Grosse's film should not really be seen as an adaptation, but rather as a drama inspired by the book. With a strong ensemble of actors and some very interesting themes dealt with in the story, the film has plenty of potential, but only too few moments of it can really be exploited. For long stretches, the film is only bearable for those viewers who appreciate typical German concern dramas, in which there are no real sympathizers and it was apparently contractually forbidden to the actors to smile sometimes.

With the intrinsically good actors and the theme, you have especially as a film critic constantly the feeling that you have to find this film good, that the claim here simply seems higher than the entertainment value. However, it wasn't just the ever-increasing boredom that the drama spread not only to me, but to other colleagues as well, that soon completely ruined that feeling. Due to the fact that the production doesn't really manage to grab, it becomes noticeable at some point that behind the supposed ambition there is also just a whole bunch of clichés that have been used many times before, which even artfully presented don't necessarily gain in quality.

Surely, there are enough viewers who don't see in the film a pretentious piece of German cinema that crushes any possibility of entertainment under an exaggerated heaviness and would be much better off on TV anyway. It's not for nothing that the drama has received many positive reviews, which it certainly deserves in some aspects. Still, it's hard to recommend moviegoers to spend their money on a film in which unsympathetic characters with grim expressions make each other's lives miserable for 90 minutes. Certainly recommendable as pure acting cinema, but as a film really only worth seeing for diehard lovers of melancholy, in every way typically German dramas!

Cinema trailer for the movie "The Weekend (Deutschland 2012)"
Loading the player ...