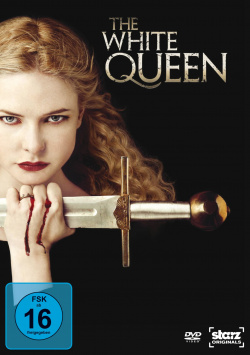 Film: England in the year 1464: For several years now, a bitter battle has been raging between the noble families of York and Lancaster for the English throne. With the help of his cousin, Lord Warwick (James Frain), known as the kingmaker, Edward IV (Max Irons) of the House of York has come to power. To consolidate it, Edward is expected to marry into the French royal house. But then the young king falls in love with the bourgeois widow Elizabeth Woodville (Rebecca Ferguson). Against the wishes of his family, he marries her, making her queen. Warwick sees this as a betrayal, since Elizabeth's family sympathizes with the Lancasters. So he marries his daughter Isabel (Eleanor Tomlinson) to Edward's brother George (David Oakes), with the aim of putting him on the throne. He has Elizabeth's father and brother executed and mobilizes troops against the king. But the wealthy Margaret Beaufort (Amanda Hale) is also pulling the strings in the background. She firmly believes that it is the will of God that her son Henry Tudor will be king of England one day. And to make this destiny come true, any means will do...

The White Queen is based on the three bestselling novels The Queen of the White Rose, The Throne of the Red Queen, and The Sisters of Thorns by Philippa Gregory. The books each highlight the same events from the point of view of a different woman, specifically Elizabeth Woodville, Margaret Beaufort, and Anne Neville (Faye Marsay), the youngest daughter of Lord Warwick. For the TV adaptation of the novel series, the three perspectives were interwoven. Queen Elizabeth is clearly at the centre as the heroine, while Margaret Beaufort and Anne Neville are given the roles of the extremely manipulative antagonists. Even if this means that not all aspects of the three books come to fruition, the series manages to do one thing very well: like the novels, it shows in a very stirring way that behind the well-known men of history there were often very different, strong women pulling the strings.

Therefore, the action also focuses almost exclusively on the events surrounding the women. The big battles fought by their men are mostly only hinted at or even mentioned in conversation. But even though there may be hardly any action, that doesn't mean that the ten episodes of this mini-series aren't very exciting. The countless intrigues and merciless power struggles keep the story engaging throughout. The atmospheric locations in Bruges, the sets and costumes, a good pinch of eroticism as well as some decent special effects also contribute a not insignificant part.

Historical accuracy, on the other hand, is only a limited strength of The White Queen. Even though the story is, of course, true to the lore at its core, the scripts, like the novels, take some significant liberties that serve primarily to bolster the entertainment value of the series. The suggestion of magical powers, for example, that Elizabeth and her mother might possess, is pure fantasy that even amateur historians will shake their heads in disbelief at (even if, of course, belief in witches possessing such powers was not uncommon in the period). In addition, the dialogues are sometimes too clichéd, which makes for unintentional comedy in some moments.

However, despite all the historical inaccuracies and thin dialogues, The White Queen is entertaining series entertainment with lots of show values, good actors and a rousing story that makes you want to look more intensively into the fight for the English crown in the 15th century. If you like stories about strong women and historical material, you should definitely give this one a look. Worth seeing!

Image + Sound: The DVD's image captures the atmosphere of the series very well. Coloring, sharpness, and contrast show off the filming locations, costumes, and sets very well. The audio is in a sometimes pleasantly dynamic Dolby Digital 5.1 mix that is dominated by dialogue and music for long stretches, but also has some really good surround moments to offer every now and then. Good!

Extras: On the fourth disc are eleven short promo featurettes with a total running time of just under 30 minutes. In addition to a behind-the-scenes look (approx. 3:16 min.) and a general overview of the series' plot (approx. 4:16 min.), there are also short clips about the journey from book to series (approx. 1:57 min.), about the true background of the story (approx. 3:28 min.), as well as about Queen Elizabeth (approx. 2:55 min.) and King Edward IV (approx. 2:30 min.). There is also a tour of the set (approx. 3:50 min.), a featurette on the costumes of the series (approx. 2:31 min.), as well as featurettes on the role of women (approx. 1:38 min.), rightful inheritance (approx. 1:28 min.), and wizardry in the series (approx. 1:53 min.). Although there is some very interesting information to be discovered, these featurettes are far too short to really go into depth. In addition, it is noticeable that the same clips from the series are used over and over again, which adds to the promo nature of these clips. Nevertheless, the bonus material is well worth watching for fans of the mini-series!

Conclusion: The White Queen is an exciting historical series that tells an important chapter from the history of Great Britain from the point of view of those women who pulled the strings behind the more famous men. The DVD presents the series in very pleasing picture and sound quality. The bonus material is very promo-heavy, but offers some very interesting information about the filming and the real background. If you don't mind a few historical liberties taken by the makers, you'll get an exciting and very entertaining mini-series here. Recommended