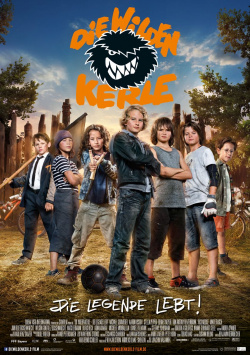 The Wild Guys - The Legend Lives

Leo (Michael Sommerer), his little brother Elias (Aaron Kissiov) and their friends Finn (Bennet Meyer), Joshua (Vico Mücke), Oskar (Ron Anthony Renzenbrink) and Matze (Mikke Rasch) love playing the Wild Guys. After all, the football heroes are a real legend whose mystical world the boys like to immerse themselves in, at least in their fantasies. But then a mysterious stranger shows up who gives them a mysterious map that proves that the Wild Guys really existed and that they have always lived in the middle of Wild Guys Land. And if that wasn't adventurous enough, it looks like Leo and the others should become the successors to the original Wild Guys. But to do so, they must defeat the team of Fat Michi (Daniel Zillmann). Should they fail, Wild Guys Land will belong to Big M, who will then raze it to the ground. Are the kids strong enough to beat the Galactic Heroes and become real Wild Guys?

Joachim Masannek has not only delivered an extremely successful children's book series with his Wild Guys. The cinema version, which Masannek also directed, has also been a real box office hit, with over 10 million cinema admissions to date across five films. So it's not surprising that this franchise should be kept alive at all costs, especially since Masannek's follow-up series, V8, hasn't brought the desired success. But now that the original guys are all in their twenties and have outgrown their roles, a new generation of football guys gets to take over.

The Wild Bunch - The Legend Lives goes back to the beginning in every way. The story, which has drifted more and more into the realm of fantasy in recent films, is now a wee bit more down to earth again - although not necessarily more realistic as a result. While the child actors perform quite convincingly - which is especially evident in direct comparison to Wilson Gonzales Ochsenknecht's appallingly bad performance - and the set designers have done a fine job of bringing Wild Guys Land to life, Masannek continues to refuse any form of creative development.

Not only is his new film strongly reminiscent of the first film in terms of dramaturgy, but the writer-director also fails to allow any other changes to take place. This is a shame in that this film would have been the perfect opportunity to bring a breath of fresh air, and not just in the actors, to a film series dominated by overblown pathos, annoying clichés and inane dialogue. But even if some scenes make your toenails roll up as an adult viewer, it also has to be conceded that the film serves its target audience well. You don't have to like it, but that's the way it is. The Wild Bunch - The Legend Lives may not be a particularly good film, but for fans of the series it is definitely a successful continuation and a promising start of the new generation. And for this there is then also a little grudgingly a deserved: Worth seeing!

Cinema trailer for the movie "The Wild Guys - The Legend Lives (Deutschland 2015)"
Loading the player ...