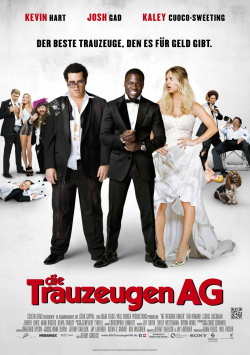 Doug Harris (Josh Gad) can hardly believe it: in a few days, he'll be walking an absolute dream girl Gretchen (Kaley Cuoco-Sweeting) down the aisle. Too bad the nerdy loner has no friends willing to celebrate this happiness with him as best man. Of course, Doug doesn't want to admit that in front of his bride-to-be, who dreams of the perfect wedding. And so he has no choice but to enlist the services of Jimmy Callahan (Kevin Hart). His company specializes in finding groomsmen for losers like Doug - not only completely discreet, of course, but also enormously believable. But since Doug is the first client to book the ultimate luxury package because he needs several groomsmen at once, the otherwise perfectly organized Jimmy is forced into action. He has to recruit new staff and come up with the perfect backstory for everyone so Gretchen won't notice the scam. A turbulent race against time begins, in which something happens that Jimmy has professionally avoided until now: his client Doug really grows on him and a real male friendship could develop from the assignment.

Director and screenwriter Jeremy Garelick delivers a very conventional US comedy with his feature film debut The Best Men AG, which strongly resembles a mixture of Hitch - The Date Doctor and Hangover. Yet the Hitch elements themselves work really well. Kevin Hart (Ride Along) takes his otherwise always hyperactive and loud acting pleasantly back. Especially in the scenes in the first third that show him on different assignments, Hart delivers a really funny and charming performance. Josh Gad is also convincing as the bumbling nerd and quickly wins over the audience's sympathies. Kaley Cuoco-Sweeting plays virtually the exact same role as a sexy dream girl who has found herself a rather unusual partner as she did in the hit sitcom The Big Bang Theory, though she is considerably less likable as Gretchen than she is as Penny.

The gag density is pleasingly high in the first 40 minutes, with Garelick rarely resorting to extremely crude and flat humor. Sure, the gags aren't exactly profound here either, but the very big embarrassments are initially absent. But just when you think as a viewer that you're dealing with a delightfully charming comedy, Jimmy and his buddies host a bachelor party for Doug. And now the movie seems to want to make up for all the crude slapstick that has been so ably avoided so far. And here, as the film moves into Hangover territory, as the level drops, so does the entertainment value.

Because after too many films have tried to sail along in the Hangover fairway, zaniness that takes place primarily in the nether regions of the body and that throws any form of subtle wit to the wind and is instead served up with a sledgehammer is neither funny nor shocking. Rather, boredom and unspeakable moments of foreign shame now dominate the proceedings. True, there are still some scenes in the last third that work quite well. But overall it becomes clear that Garelick has simply given away much of the potential of his comedy through the overuse of flat fecal humor.

The mixture of simply knitted but nice gags and subterranean crudity is so unbalanced that the film has become too well-behaved for Hangover fans, but too flat for lovers of US comedies like Hitch - The Date Doctor. Given the really amusing basic idea and the promising beginning, that's really too bad. Admittedly, there are still enough good scenes that prevent The Best Man AG from becoming a total flop. But unfortunately, it's not enough for an unadulterated viewing experience. Even the really great final gag, about which at least all fans of the series Lost can laugh heartily, can't change much!