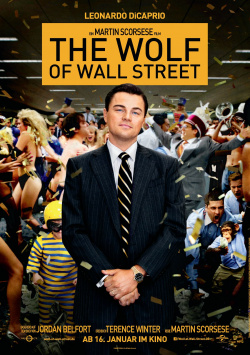 The Wolf of Wall Street

Until now, Michael Douglas, aka Gordon Gekko, has been the very symbol of the greedy, ruthless Wall Street villain. But against New York stockbroker Jordan Belfort (Leonardo DiCaprio), even the ice-cold Gekko is a regular orphan. At the beginning of his career, Jordan is a dedicated but somewhat naïve young man, who finds the hectic hustle and bustle of the stock market alienating. But his new mentor Mark Hanna (Matthew McConaughey) sees the potential in the ambitious Jordan and he teaches him all the tricks that can help him make a career on Wall Street. But the dream seems to be over for now after a stock market crash. No one wants to hire stockbrokers anymore and Jordan is back on the street. But of course he doesn't let himself be dissuaded from his goal that easily. And soon he is running his own brokerage firm, earning millions and living a life of luxury and opulence. But this success also calls the FBI on the plan, which suspects illegal business behind the facade of Stratton Oakmont. But while his boundless greed and ever-increasing arrogance may have blinded him to many an aspect of his life, Jordan is far too cunning to let the government take away his hard-won money. With the help of his loyal team, which includes Donnie Azoff (Jonah Hill) and his own father Max (Rob Reiner), Jordan is always hatching new schemes to stay one step ahead of the FBI investigators. Because the party is far from over, after all, more is never enough!

After diving into the American underworld many a time in his films, Martin Scorsese turns his attention to unscrupulous gangsters of a different kind in The Wolf of Wall Street. They don't get rich with guns, but with fraud and false promises. But even without guns, they can destroy existences just as well as Al Capone and Co. At the same time, the immoral goings-on of people like Jordan Belfort, on whose story the film is based, are truly despicable and simply infuriating. And that's why Scorsese's decision to stage the whole thing with a strong comedic twist is absolutely perfect. Because by making the whole thing seem like a crazy, somehow over-the-top trip with extremely high entertainment potential at the beginning, the audience can easily get involved in the story and get lulled by the charm of the characters. Because only in this way is revealed at the end not only the ice-cold genius of Belfort, but also the corrupting effect of power and wealth, which you can also guess as a viewer in the course of the three hours running time.

Due to the fact that there is just not from the beginning a dislike for Jordan Belfort, one is initially really impressed by his sales techniques, begrudge him his rapid rise, the admiration that his employees show him and that beautiful women make themselves naked before him. And when he goes overboard, you don't really hold it against him. But more and more you realize what a rotten game Belfort plays with other people's money, how unscrupulously he destroys existences and how perfectly he can manipulate his environment. And thanks to the excellent acting of Leonardo DiCaprio he manages to do the same with the audience. And only late in the film do you realise that, like a sheep, you have walked straight into the open mouth of the wolf of Wall Street.

Scorsese's production is shrill, loud, irreverent and completely politically incorrect. He literally celebrates all the excesses that Belfort and his cohorts live to the fullest. Sex, drugs, parties, the Oscar winner shows all of this with a relentless clarity that, on the surface, would lead one to believe that he was glorifying Belfort's actions. That this is precisely not the case becomes increasingly clear by the last third of the film at the latest, when the character's darker side is revealed more and more clearly.

Once again, back to DiCaprio. He really puts in one of the best performances of his career here. In the process, he also surprises with a comedic talent that culminates in a great drug intoxication scene for which alone he more than deserves the Golden Globe. But his co-stars also turn in truly outstanding performances here. Whether it's Jonah Hill, who leaves a lasting impression with a prosthetic tooth and penis, Matthew McConaughey with a memorable cameo, director Rob Reiner (Harry and Sally) as a choleric father, or even Oscar winner Jean Dujardin, they all ensure that The Wolf of Wall Street is not only entertaining as hell, but also an acting delight.

Admittedly, towards the end of its three hour running time, the film struggles with a few minor lengths. Still, the very positive overall impression prevails. Martin Scorsese has created a bitterly wicked satire that has become equal parts hilarious comedy and cleverly knit gangster film. Sensitive viewers will definitely be offended by some of the very drastic scenes. But the craftsmanship and the outstanding performance of Leonardo DiCaprio are beyond reproach. And for it there is then at the end also a quite clear: Absolutely worth seeing!

Cinema trailer for the movie "The Wolf of Wall Street (USA 2013)"
Loading the player ...