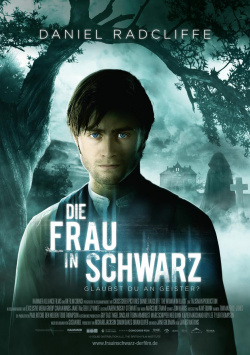 The Woman in Black

When an actor is as attached to a role as Daniel Radcliffe is to that of Harry Potter, the departure for new shores is usually extremely difficult. Even though it should be clear that Radcliffe will remain Harry forever and will hardly be able to repeat a similar success, he now ventures convincingly into new territory. Although he remains faithful to the supernatural in The Woman in Black, this small but fine scary film has little in common with the adventures of the wizard student.

In the film adaptation of Susan Hill's bestselling novel, Radcliffe plays Arthur Kipps, a young London lawyer who is sent by his law firm to the sleepy village of Crythin Gifford to settle the estate of the late owner of the remote Eel Marsh House. But before he even arrives at the house, he realizes that something is amiss in the place. He gets his booked room only after several difficulties and the lawyer, who should help him as a contact person on site, turns him away. But Arthur doesn't let that stop him from his task. But when he arrives at the gloomy mansion, the mysterious occurrences pile up and the young lawyer is drawn deeper and deeper into the mystery surrounding the mysterious woman in black he keeps thinking he sees...

With The Woman in Black, the recently reanimated cult studio Hammer returns to its roots. The novel adaptation is classic creepy horror at its finest. There's no bloody carnage, no screaming teens having to flee from an assassinating masked man, and none of the currently somewhat overused undead, whether the bloodsucking or the flesh-eating. Director James Watkins instead prefers to rely on creaking doors, ominous shadows or suddenly appearing faces, creating a pleasingly high creep factor.

Sure, neither is the story particularly original, nor do any of the scares really surprise. As an inclined genre fan, you actually always know exactly what's about to come. And yet, the whole thing works. Probably only the most hardened viewers won't flinch, claw their hands into the back of their seats or follow the dark goings-on with tense nerves. Had Watkins dispensed with the very last scene, which, while consistent in some ways, feels a little too cheesy, The Woman in Black could have passed for a perfect old-fashioned scary movie.

As for Daniel Radcliffe, of course you see Harry Potter in him again at the beginning. There's just no way to avoid that. But as time goes on, the wizarding student fades further and further into the background and the viewer is able to be fully captivated by the eerie goings-on surrounding the mysterious woman in black. Radcliffe doesn't have to show any great acting skills here. But the fact that in the end you can believe in him as the young lawyer, widower and family man is an achievement that has to be appreciated. However, it's not the actors who play the main role here, but the fascinating images of the gloomy mansion and its eerie surroundings. They, together with the coherent sound design and some discreetly used computer effects, turn a rather thin script into an effective scary movie that lovers of the rather dignified, old-fashioned and yet very effective horror should not miss. Worth seeing

Cinema trailer for the movie "The Woman in Black (Großbritannien/Kanada 2011)"
Loading the player ...