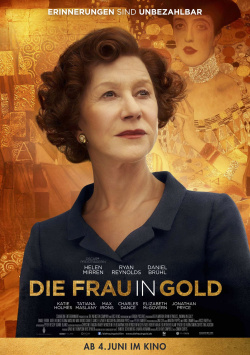 The Woman in Gold

Young lawyer Randy Schoenberg (Ryan Reynolds) thinks he's just listening to the confused ramblings of an elderly lady when Maria Altmann (Helen Mirren) asks him to help her sue back valuable heirlooms from the state of Austria. But as he delves deeper into the case, he realizes the potential this could hold for his career. For the heirlooms in question are extremely valuable paintings by Gustav Klimt - most notably the famous Woman in Gold. The paintings had been stolen from Maria's family by the Nazis. Actually, Austria would have to return the paintings to the rightful heiress. But the state refuses to part with the valuable works of one of Austria's most important painters. Randy decides to help Maria fight for her right. Thus begins a long odyssey for the two, which demands a particularly difficult sacrifice from Maria: she must face the demons of her past and return to Vienna - back to the place associated with so much suffering and loss...

With The Woman in Gold, director Simon Curtis has once again dedicated himself to an icon after My Week with Marilyn. In this case, it's the woman in one of Gustav Klimt's most famous paintings, over which a bitter legal battle has been waged. The discussion about the restitution of looted art is an important, but also a very sensitive topic. The case of Maria Altmann in particular makes it clear how difficult it is to come to terms with the injustice that befell many private art collectors during the Second World War. But the film also shows very well that it is about much more than the art objects. It shows what fates and what traumatic experiences are linked to them, which of course makes the call for justice all the louder.

Although the representatives of Austria, above all Justus von Dohnányi as Maria's adversary Dreimann, are not drawn in a particularly sympathetic way, the film also makes it quite clear what significance a work of art like The Woman in Gold can have for the owners, who are perhaps not the rightful owners, at least in moral terms. As such, the film inspires an interesting discourse that can be applied to many other cases of this nature. At the same time, Curtis deserves credit for not making a dry courtroom drama out of the case, but for never losing sight of the entertainment value of the story.

Helen Mirren and Ryan Reynolds make a very good team here, with plenty of dry humor providing a good, light-hearted counterbalance to the very dramatic flashbacks to World War II Vienna. In these scenes Tatjana Maslany, known from the excellent TV series Orphan Black, offers an extremely convincing and intense performance as young Maria, while Tom Schilling gets to show his particularly cold side. Anyway, Curtis has found excellent actors even for small supporting roles, with actually only Katie Holmes as Randy Schoenberg's wife Pam and Max Irons as Maria's husband Fritz remaining a bit pale.

The Woman in Gold is a very good example of how serious and socially important topics can be made entertaining, pleasantly light and yet profound. A very nice film that is touching but at the same time a lot of fun. And the very good interplay of Helen Mirren and Ryan Reynolds easily consoles over minor dramaturgical weaknesses, so there is no good reason to miss this work. Therefore, for lovers of the somewhat more sophisticated entertainment cinema applies: Absolutely recommended!