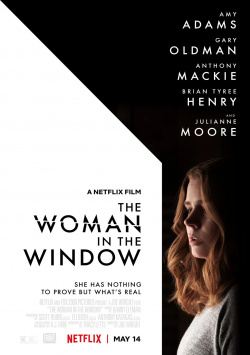 The Woman in the Window

For months, child psychologist Anna Fox (Amy Adams) has not left her Manhattan apartment. Panic attacks and extreme agoraphobia make it impossible for her to go out the door. So day after day, she sits by the window and watches the neighborhood while hoping that all the medication will make her condition better. But when a new family moves into the house across the street, a whole new horror begins for Anna. For she is convinced that the quick-tempered Alistair Russell (Gary Oldman) has murdered his wife (Julianne Moore). But everything seems to indicate that Anna imagined it. Her already fragile life is now finally coming apart at the seams...

The film adaptation of the bestselling novel "The Woman in the Window" by A. J. Finn should have hit theaters over a year ago, but has now landed on Netflix. This is a positive thing, because many people who would have bought a movie ticket after watching the good trailer would have regretted it in the end. Because despite great actors and actresses in front and a first-class director behind the camera, the thriller is very average and lacks surprises. For example, one of the story's twists is so obvious within the first few minutes that its revelation elicits only a mild shrug from viewers, definitely not anything like a completely surprised "What the...".

If the trailer had still made great desire to guess what reality is and what could only be going on in Anna's drugged head, this desire is significantly diminished in the course of the very toughly told thriller. The actual resolution is then so banal that it really amounts to a very big disappointment. This impression is then underlined by the final, extremely clichéd and predictable scene.

No question, the film also has its good aspects. The set design and décor highlight the gritty, menacing underlying atmosphere of the story. And also some very obvious reminiscences of Hitchcock are very well done. Amy Adams plays her role with full fervor, whereas especially Gary Oldman and Julianne Moore act a bit too exaggerated. So the film can only convince on an acting level to a limited extent.

For almost a year and a half I was very excited about "The Woman in the Window". However, it won't be that long before I forget about this flick again. Because despite some good aspects, there is not a single moment here that lingers in the memory. The movie isn't a total disaster, but unfortunately it's absolutely average and therefore a big disappointment. That's why I only give it one: Only very conditionally worth seeing!

Cinema trailer for the movie "The Woman in the Window (USA 2020)"
Loading the player ...